What Happened (and is still happening) 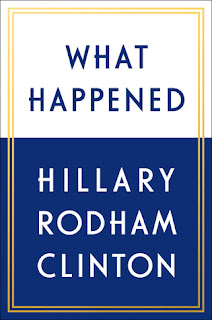 Yesterday Robert Mueller's team indicted thirteen Russian individuals and companies for efforts to influence our election for Trump and against Clinton. Finally a report that proves what we've known for over a year and should silence Trump who keeps saying that the "Russian thing is a hoax" and Putin himself assured Trump that they did not meddle in our elections. Finally GOP efforts to shut down Mueller and Rosenstein should stop as they can no longer have their heads in the sand blaming Democrats for being sore losers. (Click this link for more details.)

What Happened is the book where Hillary Rodham Clinton talks about her campaign and what she thinks happened leading up to her defeat. In addition to taking responsibility for decisions she made which may have been counter-productive, she talks about the interference from the Russians, the obsession the press had with her emails, and the last minute letter from James Comey saying that there may be more to the emails even though there wasn't. Of course she talks about Trump and his ugly campaign but a lot of the details trail back to the interference from Russia.

Months ago I placed a hold on the library's audiobook copy of What Happened. I was way back on the list, like 81st, so I wasn't sure when I would finally get a chance at it. When my turn did come up I was in the middle of another audiobook so I set this one aside for two weeks while I finished the other. With only a week to finish the book before it automatically returned to the library I launched into listening, preparing myself for an emotional experience. As I listened to the very first disc the tears started flowing. I had expected to be emotional but I hadn't realized how deep my grief. How did this nightmare happen?

In the first few chapters, before we get to all the ugly details, Hillary talks a lot about what it is like being a female in a male dominated world. She talked about being criticized for things like her voice, her passion for topics, for getting louder when she is excited...all things that men are admired for. By the end of the third disc I was determined to have my daughters listen to the book, too. Every female in America should read/listen to it. I was so inspired by her determination to make the world a better place by using her great skills for the public good.

As the campaigns went along it became clear to Hillary and her team that they were not just fighting against another campaign and his team but the press, another hostile country, and unfair/untrue accusations.  At one point during the campaign Trump even said that the first thing he would do when he became President was to arrest Hillary. Crooked Hillary became the mantra of the Right. The media would focus on the dump/terrible/despicable things that Trump did and said during the campaign and rarely covered all the policy topics and positive aspects of Hillary's campaign. One example of this was after the Democratic convention Hillary and Tim Kaine went on a bus tour to the mid-west to get their message out to the people. The media barely covered what they were doing because during that same week Trump was picking a fight against Kazir Khan, a gold star father who spoke at the Democratic Convention and challenged Trump to read the constitution. No matter what good thing that Hillary was saying and doing, Trump was getting all the press for the dumb things he was doing and saying.

What Happened details and outlines the efforts by the Russians to throw the election to Trump. As the election neared more and more Facebook and Twitter traffic started showing up with horrible and untrue stories about Hillary. Some of it was aimed at Bernie voters, others at people in the states where the election would likely be close. I even remember seeing these articles and wondering what was happening. One of this hit pieces I decided to run through Snopes which said it was untrue. The high school friend who had shared it said he didn't believe in Snopes. Really? He was willing to believe nonsense that was clearly untrue but didn't believe Snopes for discrediting it. Ugh. Things were getting uglier. We now know these hit pieces were created by Russians, under the ruse of being Americans, and bots increased their likelihood of showing up on user's pages.

As I got angrier and angrier listening to this portion of the book all of my feelings and thoughts since the election coalesced into a strong decision to do everything I can to help the 2018 be different. I was surprised, therefore, to find myself crying again as I listened to the last disc where Hillary talked about what her life is like now and what has given her hope for the future. Reminders of so many moments of inspiration since the fateful election, too. Like the reminder of Kate McKinnon singing Leonard Cohen's "Hallelujah" on SNL while fighting back tears.


I did my best, it wasn't much

I couldn't feel, so I tried to touch

I've told the truth, I didn't come to fool you

And even though it all went wrong

I'll stand before the lord of song

With nothing on my tongue but hallelujah

Questions that Hillary poses near the end of the book are ones I have been wondering myself. "Where is their [the Right] empathy and understanding? Why are they allowed to close their hearts to the striving immigrant father and the grieving black mother, or the LGBT teenager who is bullied at school thinking of suicide? Why is the burden of opening our hearts only on half the country?" She goes on to answer her own questions, "And yet, I've come to believe that for me personally and for our country generally, we have no choice but to try." Here she references the Pope Francis TED talk where he calls for a revolution of tenderness. He goes on to define tenderness as "using our eyes to see the other, our ears to hear the other, to listen to the children, the poor, those who are afraid of the future" (443). Inspiring stuff.

So you think that you don't want to go back and relive the terrible 2016 campaign by reading this book? I challenge you to rethink those thoughts. For one thing you will learn much more about the challenges that women, not just Hillary, face in politics and other positions of power. The book sets the details of the campaign aright and shines a light on all the facts which got lost among the "alternative facts" proposed by Trump and the GOP. The book was very, very helpful for me and for moving me from a person stuck in my grief and fear toward one willing to make a difference in any way I can. I heard people in the media saying they wish that Hillary would just shut up and go away now that she lost. But other Presidential losers have not been treated this way. Think Romney and McCain. This is part of the whole anti-female attitude we have in this country. Hillary had a lot of topics she was passionate about. She still is and she still wants to make a positive difference even if she isn't President.

I went ahead and purchased the audible version of What Happened, since I had to return the library copy, and then invited my daughters and husband to listen to it when their schedules allow it. I recommend that you do the same. Find a copy of this book and read or listen to it. You'll be surprised how much it helps. I mean it!

Now to my comment on my header "What Happened (and is still happening)". In case you think the Russians are done messing with us, think again. Computer bots from Russia were found on Facebook about the school shooting in Florida with pro-NRA messages and anti-African-American messages about the movie Black Panther.  These messages have nothing to do with elections but everything to do with dividing us up as a nation. We must stay vigilant and question everything we see on-line.

Posted by Anne@HeadFullofBooks at 1:54 PM