Cybils Awards announced yesterday and the winners are:

Cybils (Children's and Young Adult Bloggers' Literary Awards) winners were announced yesterday. This past year I participated as a round 1 judge for Junior High/Senior High Nonfiction books. After reading or previewing around 65 books the round 1 judges culled down our lists to 10-14 books for the round 2 judges to read, evaluate and to ultimately select one winner. It was a very satisfying and challenging duty. Nonfiction judges had many fewer books to evaluate than those who were judging the fiction categories. 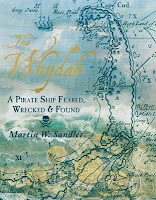 
"Whydah: a Pirate Ship Feared, Wrecked, and Found is a well-documented, action-packed story about the pirate ship the Whydah, the men who lived and worked on her, and the efforts to find her treasure. But this book is not merely the story of a specific pirate ship. It overturns stereotypes and will appeal even to those who do not believe they are “into” pirates. The men of the Whydah were not just thieves and slave runners, but men who felt they had no other way to make a living and truly cared about one another on their ships. It’s a great look at why people turned to pirating and helps the reader separate fact from fiction. Within each chapter are short sections that look at related topics like “living the pirate life” and “dressing like a pirate.” The Whydah sank off Massachusetts where it lay for almost 300 years and the final part of the book tells the story of the search for the treasures; the author doesn’t shy away from the controversy regarding the excavation and the treasure hunters. This non-fiction book is full of adventure and excitement."

I am thrilled with this winner. This is a perfect nonfiction books for teenagers. It is exciting, interesting, and opens up the imagination. And it is very well-written, a rare bonus in teen nonfiction books. When I finished reading this book I was sitting in the family room with my husband. I remember turning to him as I snapped the cover shut and said, "Ah, at last a well-written book." After reading so many interesting yet rather dry nonfiction books, it was a pleasure to be immersed in this one.


"Vincent and Theo: the Van Gogh Brothers is a beautifully written book based on letters between the two brothers; it is narrative non-fiction that reads like fiction. It has an appealing layout with short chapters. This book is not just a book about a painter and his brother, but a book about mental illness and its impact on Vincent Van Gogh’s life, his art, and his relationships; it has themes of love, resilience, and influence. This book shows the importance of Theo in Vincent’s life and that without Theo, Vincent wouldn’t be the man and artist that he became. Although this book is over 450 pages, it will lure readers in and keep them turning its pages."

I've always loved Vincent Van Gogh's art but more so after reading this wonderful piece of narrative nonfiction where the reader meets not only the artist but also the brother who encouraged and supported him. This book has been well regarded in the literary world this past year. It earned six starred reviews by professional publications. It also won a Printz Honor, and the YALSA Nonfiction Award, both of these were just awarded earlier this week. It is rare when a nonfiction books wins a Printz award. I am thrilled with this Cybils selection. If the 450 pages seems daunting, look for it in audiobooks, but be sure to pick up the print edition to look at photos to the art.

Other YA Cybils winners


Spill Zone is a fun graphic novel that captivates the reader with its mystery, kick-ass female lead and vibrant art. Alex Puvilland’s art is loose, a little off-kilter and great with its colors when differentiating the psychedelic world of the Zone with the world outside of it. Along with Scott Westerfeld, the two creators have perfected pacing and will have teens wanting the sequel immediately.

Notice who nominated this book? Tee-hee! Me! I think this imaginative Sci-Fi story is fun, mysterious, and even a bit creepy. It is the first book in a series by a favorite YA author, Scott Westerfeld, so keep your eyes peeled for the sequel, too.


"In Watson’s sophomore YA novel, we meet Jade, a girl who’s determined to get out of her neighborhood in order to have a better future. She’s done everything she can toward that end, including enrolling in a mentorship program for “at-risk” girls. But that’s not really who Jade is, and being in the program only highlights for her what people see when they look at her: a Black girl on the bigger side from a poor neighborhood. Even her mentor, who’s also Black, doesn’t seem to get who she really is. And that just helps push Jade to show the world what she can do.  Not only is this a beautifully written and poetic book, but it’s infused with a quiet strength in the way Jade finds her power, her voice, and her identity in a world that doesn’t make it easy."

This is the only book of the bunch I haven't read, but I want/need to now! It also won multiple awards at YMA announced this week: Newbery Honor and Coretta Scott King Honor.


"While all the novels in the YA Spec Fic shortlist are well told and exciting, Scythe is spell-binding and grapples with the darkest themes in literature. The world is rich and complex. Scythe develops every facet, from the powerful leaders to the apprentices. The cast of characters is diverse, convincing and three dimensional, from the scythe who kills with wisdom to the one with blood lust."

Scythe was published after October 15, 2016 making it a possible candidate for the Cybils this year. But it won a Printz Honor last year because the YMA use different dates for inclusion. I read this book as soon as it was published back in 2016 and found it to be very disturbing, yet intriguing. I believe it has a sequel which was just published this past month called Thunderhead. I hope to get to it some day since I think this first book was done so well.

Posted by Anne@HeadFullofBooks at 2:37 PM