And the YOUTH MEDIA AWARDS go to... 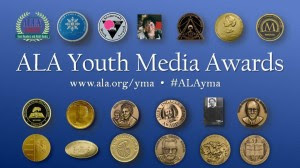 The YMA Awards were announced last night and the YA winners are: (For the full list click here)

10. Odyssey Award (Audio Book)
11. Sibert Informational  Book Award (Distinguished Informational books)
12. Mildred Batchelder Award (Translated into English)
13. Laura Ingalls Wilder Author Award (An author or illustrator whose work has had a substantial and lasting effect on Children's literature)
14. Newbery Medal (Most outstanding contribution to children's literature)
Comments: I am generally very pleased with this year's winners and honor books. I have read a lot of the titles, which I have highlighted in yellow, and I have heard of most of the others. Books marked with the aqua highlight were part of the Bethel School District Mock Printz list of books. Every year we try to divine which books will be those that receive awards. We didn't do too bad this year! As in the past, many of the awards did not honor any YA titles, but this year many more categories than usual DID give an award or an honor to at least one YA title. I was really, especially pleased to see that the Newbery Medal, the oldest and most prestigious of all book awards for children's literature, gave honors to two YA titles.

Surprises: I am surprised to see We Are Okay as the Printz winner. I read the book and really didn't like it. I know that happens sometimes. When I would hear other people praise it I would wonder if we actually read the same book. Maybe I'd better go back and try it again.  The other surprise was the honor for Strange the Dreamer. I just told someone this past weekend that I hoped it would win something but I doubted it would because it is the first book in a series. Well, I was wrong and I am glad about it. One more surprise. I have not even heard of any of the Alex Award books. These are the adult titles that have crossover appeal for teens. I used to try to purchase a few of them for my library. The new librarian may have to do some deep research to determine if she wants any of these titles. I can't say anything about any of them.

Now I guess we'd all better get out our list of books we want to read and add a few more titles to it. Happy reading.

Posted by Anne@HeadFullofBooks at 12:33 PM