The Neverending Story by Michael Ende 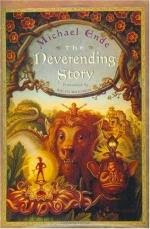 Writing a review for The Neverending Story by Michael Ende feels a little like writing a review for a Harry Potter book. Many people who haven't read the book have seen the movie (and remember it fondly) and, therefore, have no intention of going back to read the book. With this in mind I will give you the barest of summaries, in case you are the only other person in the world who hasn't seen the movie besides me, then I will focus the rest of this review on information on the author and what symbolism I could glean out of it.

Summary: A young boy named Bastian Balthazar Bux is chased by his tormentors from school in to a bookstore. While there his is enticed to steal a very pretty book, The Neverending Story. He hides out in an attic at his school and begins reading the book. The plot then jumps to the story and back to Bastian. In the story we are introduced to a young hero, Atreyu, who is tasked with saving Fantastica from the NOTHING by locating a human child willing to enter the magical land to give the Childlike Empress a new name. The NOTHING is taking away all dreams and fantasy from the land.

At some point while reading the book Bastian enters the story and he starts to recognize himself. He thinks it is an hallucination. But eventually he realizes that he is the human child who must go to Fantastica to save it. And after he figures out how to get in he finally does enter the realm where all kinds of fantastic adventures of his own making await him.

The book is divided in two parts: before and after Bastian enters Fantastica. Apparently the movie ends after part one so if you have only seen the movie then you really should read the book to get the full story! There. That is my plug for reading!

The author, Michael Ende was German. The book was first published in Germany in 1979 and translated in to English in the early 1980s. Though Ende was one of the most celebrated German authors of the 20th century he was often felt diminshed when people referred to him as just a children's writer." In 1985 he wrote,


One may enter the literary parlor via just about any door, be it the prison door, the madhouse door, or the brothel door. There is but one door one may not enter it through, which is the nursery door. The critics will never forgive you such. The great Rudyard Kipling is one to have suffered this. I keep wondering to myself what this peculiar contempt towards anything related to childhood is all about.[1]

Ende wanted his work to speak to the human condition, issues that children aged 8-80 grapple with. Born in Germany in 1929 he lived through the Nazi era. He was horrified by the war and action of the Nazis. His father, a surrealist painter, was deemed a degenerate by the party and so had to paint and work in secret. By the end of the war, though he was only 14, Ende was drafted but tore up his papers and worked for the resistance in the Munich area. Up until his death in 1995, from stomach cancer, Ende used his writing to shine a light on cultural and spiritual problems in the world, drawing upon his experiences from the war years.

"Rich with symbolism, The Neverending Story is a classic children's tale designed to teach young people to come of age emotionally." [2] Children might miss all the lessons because they are painlessly presented in fantastical imagery and wild tales of adventure.


The story is an important contribution to literature because it addresses the dangers of tyranny. While Adolf Hitler and his Nazis are not directly mentioned in the story, the tale nonetheless reveals an understanding of the emotionally stunted mindset that leads dictators to hunger for power. Through the character of young Bastian Balthazar Bux, the reader gains an intuitive understanding of how life's tragedies can lead one to commit atrocious acts. The author, through Bastian, is reaching out to the youth of the world, telling them that the journey from pain to joy is achievable. [2]

Bastian learns eventually that he has to accept himself and has to give up any preconceived ideas about himself (both good and bad) if he is able to move on and actually be any help to his world.

The last chapters of the book are sublime. They are so full of symbolism and important messages we should all heed. For these messages alone the whole book, even the slow bits in the middle, make the book worth a second look. I originally selected the book because it was referenced in another book: 501-Must Reads by Emma Beare, where the concluding sentence hooked me. "This is a wonderfully satisfying and uplifting novel for readers of all ages." [3]

I listened to the audiobook which was magically narrated by Gerard Doyle, who, if I am not mistaken, was the reader of the Eragon series. I have all kinds of pleasant associations with his voice, that is for sure! I wholeheartedly recommend it in this format, though, be sure to go back and look at the print edition which is divided into 26 chapters and each chapter begins with the corresponding letter of the alphabet. Very clever.

Posted by Anne@HeadFullofBooks at 10:54 AM