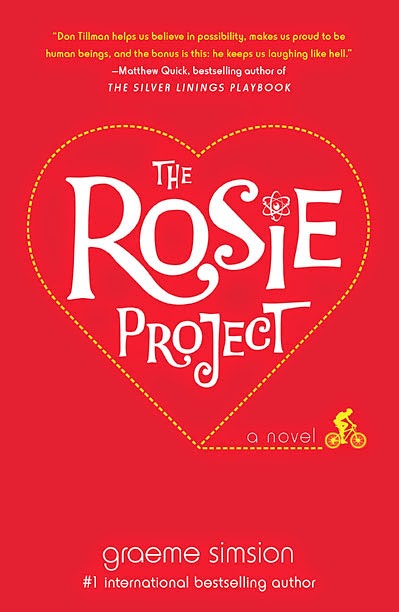 Rarely is there a book that so universally delights readers even hardened cynics can't resist The Rosie Project by Graeme Simsion. It is truly a publishing phenomenon, having been picked up by 38 publishers worldwide. It was called the "feel-good-book-of-2013" which was extended to 2014 and 2015, with its sequel The Rosie Effect coming out late last year. Even Bill Gates is charmed by the book.


It’s an extraordinarily clever, funny, and moving book about being comfortable with who you are and what you’re good at. I’m sending copies to several friends and hope to re-read it later this year. This is one of the most profound novels I’ve read in a long time.---Bill Gates, Gatenotes

Don Tillman, a 39-year-old genetics professor, who is somewhere on the autism-spectrum though he doesn't recognize it in himself, is the book's narrator. Nowhere in the book is Asperger's Syndrome mentioned but it is certainly implied that Tillman has it. Professor Tillman acknowledges that married people are happier than unmarried counterparts, so he starts the wife project to find the ideally compatible wife for himself. He creates a long questionnaire to weed out incompatible women. He hands this questionnaire to women he meets at social gatherings. Along the way he meets Rosie, who is the most incompatible woman possible. She is constantly late to appointments, she is a vegetarian, and she smokes, all no-no items on his list. Nevertheless, Tillman gets sucked into the Rosie project which is to help Rosie identify her biological father using DNA testing. Hilarity ensues. Tillman is completely baffled by his feelings for this completely incompatible person.

Both of my book clubs selected this book as our month of March selections. I honestly thought we would have next to nothing to talk about, which is what usually happens when everyone likes a book. But to my shock we had thoughtful and fun discussions in both clubs. We discussed aspects related to living on the "spectrum" and how we, the population at large, often judge and do not understand our differences. Like Christopher Boone in The Curious Incident in the Night-time, Don Tillman helps shed a light on what it is like to navigate life with autism. We all came away with the conviction that "one needs to be comfortable with who they are, and what they are good at."

On a personal level, my youngest daughter read the book last summer and made me promise to read it after she was finished. When I didn't get right on it, she continued to hound me. The book is so good it doesn't diminish in the mind over time. I opted to listen to the audiobook and when the library copy was booked way out I purchased my own copy. After laughing my way through the whole audiobook and being charmed by the Australasian accent of the voice actor, Dan O'Grady, I handed off the audiobook to my oldest daughter. Now the three women of the family have all completed the book and we have a common experience from which to draw. Now the challenge: can we talk my husband into listening to the audiobook but himself without one of us in the car at the same time?  He agreed after I explained to him that Bill Gates was huge fan of the book. He is currently in the middle of the book, listening to it during his morning commute to work. Every day he recounts some funny quip or joke from the book. Soon every member of my family will have The Rosie Project in common. More proof that books bring people together.

If you haven't jumped onto The Rosie Project bandwagon, I highly recommend that you do so soon. I say this because I understand that a film is already in the works. Books are always better than the film but most people, even me, don't go back and read the book after seeing the film.  Hurry on down to your favorite book store or library today!

Posted by Anne@HeadFullofBooks at 8:09 AM