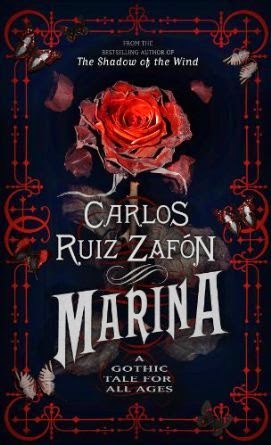 Cue the music for Bach's Toccata and Fugue in D Minor for a little atmospheric music while you read this blog.


Listening to the audiobook of Marina by Carlos Ruiz Zafon was a terrifying experience. It was like I was watching a scary movie, without the video component, because I had a soundtrack running through my head every time Oscar and Marina found themselves face to face with the horrifying monsters. And the music I "heard" was similar to what you are listening to right now, creepy and full of tension. I don't usually read books in the horror/gothic genre for good reason---I get scared and easily spooked.

Marina was originally published in Spanish in 1999. I am not sure why it took fifteen years until it was published here in the USA but it was worth the wait. At that time Ruiz Zafon was writing it he acknowledged that it would be his last young adult novel. Perhaps for this reason, this book is one of his favorites. It is considered  a cult classic in his native Spain. There are over 10,000 reviews on Goodreads. This is a POPULAR book worldwide.

In May 1980, fifteen-year-old Oscar Drai suddenly vanishes from his boarding school in the old quarter of Barcelona. For seven days and nights no one knows his whereabouts. . . . His story begins in the heart of old Barcelona, when he meets Marina and her father Germán Blau... Marina takes Oscar to a cemetery to watch a macabre ritual that occurs on the fourth Sunday of each month. At 10 a.m. precisely a coach pulled by black horses appears. From it descends a woman dressed in black, her face shrouded, wearing gloves, holding a single rose. She walks over to a gravestone that bears no name, only the mysterious emblem of a black butterfly with open wings. When Oscar and Marina decide to follow her they begin a journey that will take them to the heights of a forgotten, post-war Barcelona, a world of aristocrats and actresses, inventors and tycoons; and a dark secret that lies waiting in the mysterious labyrinth beneath the city streets.-Summary from Goodreads

The audiobook was read by Daniel Weyman, a British actor, did a surprisingly good job on the Spanish words and locations in the text. Below is an audio clip of the book.  Turn off the creepy music and have a listen to Weyman read a few pages of Marina.


The reviewer for Marina on The Guardian commented that Marina is a perfect book to read this time of year (Halloween) and should be consumed in a short time frame.  That is a problem with an audiobook since most people cannot listen to anything for 7.5 hours in a row unless they are on a long car trip. It took me over a week of listening to finish it and I confess that there were times I HAD to stop listening when I wished I could continue (aka at a scary spot in the story) yet I still enjoyed the whole experience.

Posted by Anne@HeadFullofBooks at 7:50 PM