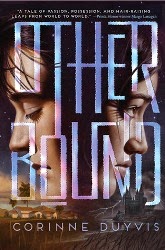 High school can be hard on the most popular of kids. But for Nolan, an amputee with a seizure-disorder, high school is almost unmanageable. At least everyone thinks he has a seizure disorder by the way that he zones out for long periods of time, seemingly gone from the world. In actuality Nolan is gone from the world. Every time he closes his eyes he is transported into the mind of Amara, a servant girl living in a place called Dunelands. In Dunelands, where mages and magic are common, Amara is forced to protect the exiled princess from harm. She does so by allowing harm from magic spells to hurt her instead of the princess. She can survive these magical spells because her body magically itself. Nolan has been watching this from afar for years until he suddenly realizes that he can manipulate her body causing Amara to become aware of his presence. They end up having to work together to discover the truth about the princess and those in charge of the revolution.

Debut author Corrine Duyvis has imagined a complex plot and fully flushed out an imaginary world in Otherbound. Dunelands seemed more real to me than our Earth. Magic spells and counter spells got all tangled up with detrimental effects on everyone. Relationships were complicated, messy, and sometimes hurtful. The conclusion was tense and exciting and didn't resolve predictably. Oddly, however, Duyvis went a bit overboard on trying to be inclusive. Nolan is an amputee, Latino boy. Amara is a mute servant because her tongue was cut out when she was a child. There are LGBT themes at play. To some degree these issues threatened to swamp the story rather than move it forward. Ryan Paulsen, for SLJ, disagrees with me,  he thinks "the true strength of the novel is in its positive portrayal of LGBT issues." Guess you will have to read it and decide for yourself.

Otherbound is one of our Mock Printz books. We selected it based on the first 50-pages, which was all I had read up to that point before our selection committee met. Students aren't as enamored with it as I'd hoped. They report that it is confusing (it is) and it takes a long time for the story to develop (it does.) Several students haven't even read it to the end, which is a shame since the ending is so exciting. Honestly, I understand their position and will do a better job setting up future readers of this book by telling them a bit more of the storyline to help ease the confusion.

Duyvis’s debut is an exciting take on the fantasy genre. I'd actually like to read more about this world.

Posted by Anne@HeadFullofBooks at 9:10 AM