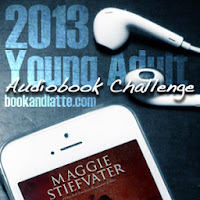 At the beginning of 2013 I joined the YA Audiobook Challenge hosted by  book and a latte.com. I like to listen to books-on-CD so thought this challenge would be a good fit. Part of the challenge was to also complete a review of the audiobook. How did I do? I listened to 26 YA audiobooks, my goal was 24, and wrote reviews for all but three of the them. Not bad. I was pretty terrible about posting those reviews over at my host's site, however.

Below is the list of YA audiobooks with hyperlinks that I listened to in 2013. The highlighted books were my top books based not only on the storyline but also on the work of the voice actor who read the book.
I really enjoy reading books in this format and can recommend just about all these books without a moment of hesitation.

Posted by Anne@HeadFullofBooks at 9:29 PM