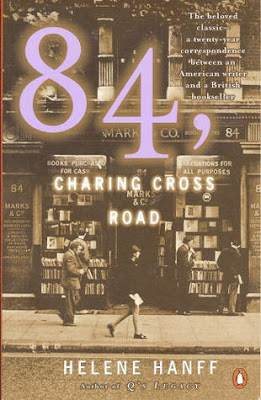 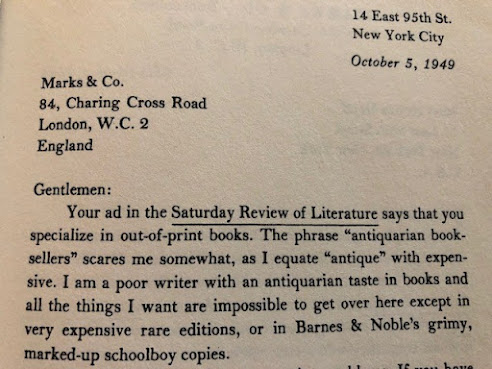 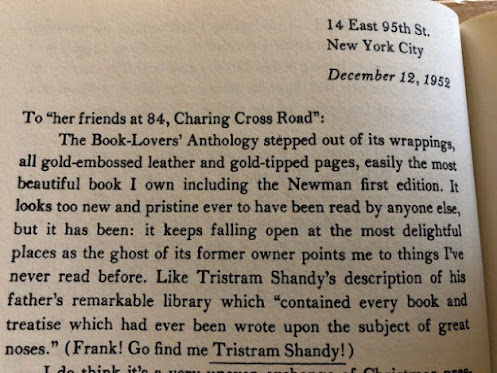 Summary: This collection of correspondence between Helene Hanff and an Antiquarian book seller in London were written over a twenty year period of time. During that time several employees and others at the book shop communicated with Ms. Hanff but the main person to communicate with her was Frank Doel. His letters start out very formal but over the years one can tell that a true friendship has developed between the book seller and his customer. Indeed the letters aren't all about books, either. When Hanff learns that the folks living in London are still having rations and scarcity of products like for eggs and meat, she starts sending what she can of these products. Hanff, who is a freelance writer and playright, is not very well-off but she shares what she can and makes more friends among the employees and with Doel's neighbors even. Throughout their many years of correspondence they never meet in person, though occasionally Hanff sends a friend who is in London to drop by the book shop. She eventually visits in 1971 after the ship has been closed and after this collection of letters were published.

Review: One can't spend any amount of time in the book blogging world without people mentioning this book, 84, Charing Cross Road. Surprisingly, I didn't even know it was true or that it was a collection of letters and other correspondence. I thought it was a short novella.

As you can see from the two examples I provided, Helene Hanff had a warm and funny writing style. The second example was undoubtedly thanking the team in London for a book which likely included a tag, to Helene "From her friends at 84, Charing Cross Road." So that is how she addressed them in this letter.  Sometimes she wouldn't even submit to a greeting and her letters would just launch into the subject of how much she loved (or disliked) a certain book.

One would think, after hearing the summary of book, that the book is basically about nothing much. But it really is such a kind, funny, thoughtful book about books, friendship, worries, and life. I bet a lot of people read and reread it often. When she died the New York Times Obituary called Hanff a "Wry Epistler." In his original review of the book Thomas Lask wrote: ''Here is a charmer: a 19th-century book in a 20th-century world. It will beguile an hour of your time and put you in tune with mankind.'' (NYT).

Hanff decided to publish the letters as a memorial to Frank Doel. It was politely accepted here in the US, but wildly popular in the UK. In fact, the following year the book was adapted for the London Stage. The money she made from the book is what allowed her to finally visit Britain to see the book shop for herself.

I found the book charming and funny and I was also gob-smacked by a few things. First, the price of the books was so cheap. Hanff was often charged two or three dollars which I'm sure included postage. Secondly, Hanff sent eggs to London. Can one send eggs through the post and they arrive unbroken? A question I have no answer for. Now I recommend this little gem to you.

Posted by Anne@HeadFullofBooks at 8:47 PM