This time around for the Classics Club Spin selection I listed twenty Victorian authors, instead of listing twenty classic books. This allowed me to combine two challenges, Victober and Classics Club spin, and allowed me the freedom to select a book title once I learned the author who was selected.

The spin number lined up with Robert Louis Stevenson, a solid choice and an author I've not read much in my life, with the exception of his children's poems.

My first task was to peruse the library catalog to see what was available for checkout immediately. I ordered A Child's Garden of Verses (Heck, nothing wrong with a quick review of book I was very familiar with as a child), an audio version of Treasure Island (Can you believe I've never read it?), and a print version of Dr. Jekyll and Mr. Hyde and Other Stories (Probably too creepy for me, but I'll try). I would decide once the holds came in as to what I would actually read.

A Child's Garden of Verses arrived in record-breaking time. I guess there aren't a lot of people who are waiting in line to read poems by a guy who has been dead for over 120 years. As I started reading the poems I was immersed in a warm feeling of comfort and familiarity. When I was growing up we didn't have a lot of books just hanging around the house, but we had my mother's childhood copy of A Child's Garden of Verses. I read and reread the volume of precious and short poems to myself and probably to my younger siblings. What happened to that book? I didn't have to wait long to find out. My younger sister told me that Mom gave it to her daughter several years ago with a sweet note written inside the front cover. I asked her to take a few photos of it for me.

A friend, Carol, told me that she too was raised on a steady diet of these poems yet when she read them to her children she found many of them to be objectionable. I had the same experience with them this time around. Society and our culture has moved away from a white/Eurocentric  point of view so several of the poems offend me now. For example "Foreign Children" contains these lines: You have curious things to eat, / I am fed on proper meat; / You must dwell beyond the foam, / But I am safe and live at home. / Little Indian, Sioux, or Crow, / Little frosty Eskimo, / Little Turk or Japanese, / O! don't you wish that you were me? I think that is the worst of the offenders but I would recommend that if as a parent you decide to read the poems to your children, read them through yourself first. That way you can avoid the poems that no longer fit with our sensibilities. 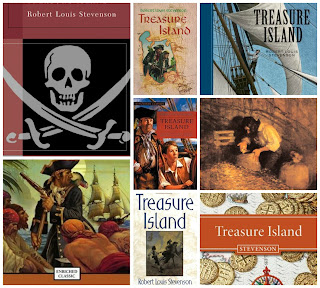 Can you believe that this is the first time I've read Treasure Island? Well, it is and I loved listening to every minute of it on the audiobook from the library. It is hard to believe that anyone would publish such a story for children today what with death/murder and drunkenness as prominent themes on just about every page. But what a swashbuckling adventure. I couldn't help whistling along, sort of picturing the Pirates of the Caribbean ride at Disneyland, "Yo ho, Yo ho, a pirates life for me."

Stevenson said that Treasure Island started when he and his 12-year-old stepson, Samuel Lloyd Osborne, created a treasure map together. The story sprung out of that map. Fanny, Stevenson's wife, and Thomas, his father, also helped craft the story which became a popular book after it was published in 1882. In fact the commercial success of the book allowed R.L. Stevenson and his family to roam around the world looking for a home where he could breathe better (A chronic lung ailment plagued him all his life) and to search for yet another good tale or yarn.

As I listened to this tale of young Jim Hawkins and his adventures on Treasure Island I kept thinking to myself that this should be the book that teachers read aloud in class, not Anne of Green Gables or Little House on the Prairie because this one, unlike the others, is such a boy story and it seems that it would ignite boy's imaginations. In fact, I added it mentally to my list of books I want to read aloud to my grandsons when they get older. Then, while I was perusing Wikipedia for information about Stevenson, I ran into this quote about a conversation between Robert Ebert (film critic) and his friend:

I was talking to a friend the other day who said he'd never met a child who liked reading Robert Louis Stevenson's Treasure Island.

Neither have I, I said. And he'd never met a child who liked reading Stevenson's Kidnapped. Me neither, I said. My early exposure to both books was via the Classics Illustrated comic books. But I did read the books later, when I was no longer a kid, and I enjoyed them enormously. Same goes for Stevenson's Dr. Jekyll and Mr. Hyde.

The fact is, Stevenson is a splendid writer of stories for adults, and he should be put on the same shelf with Joseph Conrad and Jack London instead of in between Winnie the Pooh and Peter Pan. (Wikipedia)

Okay, check that idea of reading Treasure Island to my grandsons. Maybe I should let them discover it as I did, as an adult. They'll probably like it better that way.

After my success with Treasure Island I felt confident in my ability to read a tale from the darker side, Dr. Jekyll and Mr. Hyde. I opened the paperback version that had arrived from the library. After reading less than one page of its small and tight print, I touched the book as to say goodbye, closed it and said "no." Good enough. I'd read two enjoyable Stevenson books and didn't need to read more. So ends my last Classics Club spins of 2021 and my first foray into reading Victorian authors in October for Victober.

What is your favorite R.L. Stevenson book or story?

Posted by Anne@HeadFullofBooks at 12:29 PM