Nonfiction Review: BLACK BIRDS IN THE SKY: The Story and Legacy of the 1921 Tulsa Race Massacre 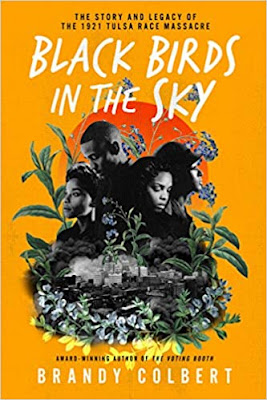 Long covered-up historical events which place a negative focus on white supremacy are coming to light. The truth about aspects of our dark history are revealed in BLACK BIRDS IN THE SKY: The Story and Legacy of the 1921 Tulsa Race Massacre by Brandy Colbert. The Tulsa Race Massacre was not only an attack on a community of people, but also part of the greater record of violence against Black Americans.

The attack on the Greenwood district of Tulsa by a white mob was sparked by an alleged attack of a white girl by a black boy. However this attack, which destroyed a thriving community sometimes called the Black Wall Street, was just an inflection point to a simmering atmosphere of brutality. Colbert not only highlights the events which immediately led to the May 31, 1921 attack but also many aspect of our nation's history, starting the formation of the state of Oklahoma and the displacement of indigenous tribes to lands near what became Tulsa and the succession of discriminatory laws passed after Reconstruction. Topics like lynching, formation of the KKK, and discrimination in housing were covered in this book as well as other horrific events that occurred close in time to the Tulsa Massacre, like the Elaine, Arkansas Massacre where hundreds of blacks were killed for daring to consider forming a union.

I'm sure by now you have heard of the term 'White Fragility.' Well, this book was stuffed full of the horrors that Black Americans endured throughout our history. So full, in fact, that I found myself cringing. It was so graphic and the picture so complete I felt myself wanting to look away. I felt guilty by mere fact of my own race, white, and the horrors that were conducted 'in my name.' I recognized what was happening and tried to stay present and open to learning and growing. How can I be a better ancestor if I don't want to acknowledge the pain of our past (and present)? But I confess it was tough and is probably the reason I didn't read this book very fast, often pushing it off to the side preferring to read something a bit more lighthearted.

I found the last chapter, "The Legacy of Greenwood", and the Afterward quite helpful for my understanding. For decades the Tulsa Race Massacre was a taboo subject in schools. Why? Julian Hayter, a historian and professor at the University of Richmond, explains that the school curriculum "was never designed to be anything other than white supremacist, and it has been very difficult to convince people that other versions of history are not only worth telling. They're absolutely essential for us as a country to move closer to something that might reflect reconciliation but even more importantly, the truth" (187).

Colbert, interestingly, addresses the COVID-19 pandemic in her Afterward, comparing it with the 1918 Influenza Pandemic. Why does history seem to keep repeating itself? She says, "One question I keep coming back to as I think about these two deadly pandemics: Is history bound to repeat itself no matter what, or does it repeat itself because so many people don't want to look to the past to see how we got to the future?" (192) She went on to talk about what is happening in our country around the divisiveness of politics. Even though Biden won the 2020 election she was shocked by how many people were willing to vote for Trump, someone who had done so much damage the country's democracy, reputation, and integrity. She believes this is because people do not know their history. Citing surveys recently completed, 63% GenZ and millennial respondents didn't know that six million Jews were killed during the Holocaust and 36% thought the number was two million or less were killed. 48% couldn't name one single concentration camp (201).

Clearly we have to do a better job educating our youth about our history -- covering both the good and the bad aspects. This book is a great place to start.

Posted by Anne@HeadFullofBooks at 5:29 PM