Nonfiction review: I AM, I AM, I AM: SEVENTEEN BRUSHES WITH DEATH: A Memoir 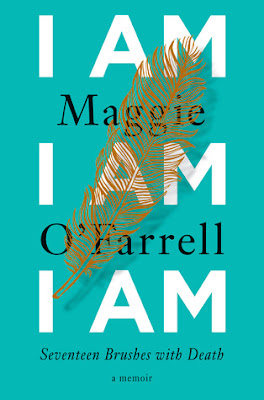 After reading Hamnet by Maggie O'Farrell earlier this year I knew I had to read more books by the same author.  I loved the writing in that book so much, I was ready to stay in the Shakespeare's world that O'Farrell created forever. After a brief amount of exploration I settled upon reading O'Farrell's memoir because the title was so unique: I AM, I AM, I AM: SEVENTEEN BRUSHES WITH DEATH: A Memoir. I knew the "I am, I am, I am" came from Sylvia Plath's Bell Jar but what really intrigued me was the "Seventeen Brushes with Death" part.

The memoir, not told in chronological order, starts off with a bang, too. O'Farrell at eighteen escapes being murdered after a chance meeting with another hiker. She is haunted to this day by the "what if" of that situation, as I imagine I would be also. And so begins her march through various diseases and accidental close calls. As she recounts her near misses we learn about a restless girl who craves movement above all else. Her stories all circle around the biggest and worst close call -- a case of encephalitis at age eight which caused her to lose all muscle use, having to relearn everything (walking, writing, feeding self) after she recovered from the disease. Her survival was not assured, in fact, medical professionals felt she would likely die from the disease. Looking back she felt lucky that she did, instead of unlucky that she was so sick for so long. In the end she shares the story of her daughter who is so severely allergic to nuts, seeds, and eggs that the merest hint of any of them can cause anaphylaxis and potential death.  Like all loving parents, she wishes she could take this burden off her daughter and shoulder it herself.

After finishing the I Am, I Am, I Am audiobook, expertly read by Daisy Donovon, I wanted to live inside the story for longer. I wanted to go on learning about O'Farrell's life, just like I wanted to learn more about Shakespeare's life in Hamnet, as long as O'Farrell was telling the story. What an amazing writer! I highly recommend this book.

I'm guessing this is natural but it seems like an odd thing to say -- I couldn't help thinking back over my own life as I listened. Have I had any brushes with death? I can think of four possibles: two involving water and current, one involving a tree, and one, and this tale I tell for the humor of it, I was chased by a moose and I knew if she got to me I was a goner. That's it. No deadly diseases, precarious accidents, or potential murderers for me. When I asked my husband, his story was quite different. He was a rambunctious kid and nearly died of accidents of his own making at least twice, was in a rollover accident as a passenger in a car, had several near misses when he worked as a logger, and then he went to war in Iraq and every day worried about his safety. Eek. Several of the stories were news to me as he told them over our lunch of ham sandwiches. Maybe O'Farrell is correct. We all have our own near death stories to recount if we are willing to take a look back on them.