Book Burning: The Push Back 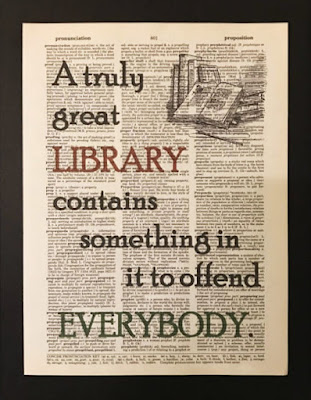 One school board, in Spotslyvania, VA, has walked back its earlier vote to start "burning" all library books with sexually explicit content according to the Free Lance-Star. Speaker after speaker attended what turned into a four hour meeting and decried the vote, including students, parents, librarians and even one retired teacher who had taught one of the “book burning” Board members.

"This board doesn't understand who our students really are," said one county librarian. "We have students who are victims of sexual abuse, who have been forced to prostitute, who have two moms or two dads, who identify as LGBTQ+, whose home is drug-infested. The school library is a safe place for them to find themselves in books."

And a student spoke up at the meeting that didn't adjourn until after midnight. Courtland High School student Alexander Storen credited books with saving his life last year, during a time when he twice attempted suicide.

"[The book 'Shattered'] may have saved my life," he said. "It showed me that my life had meaning, that it mattered. When our School Board, which is supposed to have the best interests of our students at heart, bans books because they contain LGBTQ+ representation, what message is that sending to our teens, to our kids who are at risk? It's like saying, 'You don't matter.'"

Last week one board member, Abuismail, actually used the words "book burning" when talking about books he doesn't approve of.  Since that time over 1000 students have signed a petition asking him to resign or he might be recalled.

Maria Glass, a retired county high school teacher who said she had Abuismail in one of her classes when he was a student in the county, said that of the 7,000 high school students in Spotsylvania, “too many of them are not leading a ‘Brady Bunch’ life.”

“They may be facing a sexual predator or living with abusive parents,” Glass said. “These students live in our community and go to our churches. If there is only one who finds the courage to turn in his predator [after reading a book that deals with that subject], then that book has done its job.”

Students credited books they read in school or checked out of the school library with helping them see themselves, teaching them about difficult subjects and carrying them through challenging times. One Black student told how often she was bullied until the class read To Kill a Mockingbird.

“Books teach compassion. They teach empathy,” she said. “After we read ‘To Kill a Mockingbird,’ I wasn’t called the n-word again.”

One by one librarians took to the mic begging the board to respect their education and training and their support for the right for children to read.

“I tell students, ‘Remember, no one but your own parent or guardian has the right to dictate what you can and can’t read,’” a county librarian said. “Your freedom to read is a constitutional right. I promise my students that I will defend their right to read, so here I am tonight fulfilling that promise.”

Posted by Anne@HeadFullofBooks at 6:08 PM