Nonfiction Review: RACE AGAINST TIME: The Untold Story of Scipio Jones and the Battle to Save Twelve Innocent Men 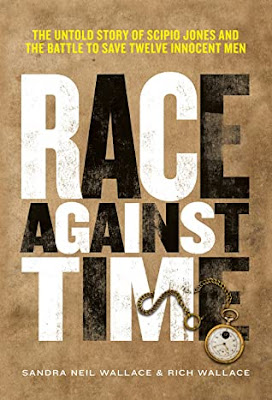 I've been thinking a lot about US history classes in public school lately. Why? Because I keep learning about events which happened in our history that never saw the light of day in the books we were directed to read in school. Some people are upset that 'Critical Race Theory' might be taught in their schools not even understanding what the term, which was coined over forty years ago, means. But I think the gist of what is being said is that people are uncomfortable with the idea that information about our racist past will make kids feel uncomfortable being white today if they are forced to learn about it in school. Oh, please. (Did you read that with the eye-roll it was delivered with?) I get it. We can't go back and undo our racist actions of the past, but we can allow those especially egregious events to come out from hiding and inform us and to help prevent these types of events from occurring in the future.

RACE AGAINST TIME: The Untold Story of Scipio Jones and the Battle to Save Twelve Innocent Men by Sandra Neil Wallace and Rich Wallace is an account of one of those racists events which was swept-under-the-rug until now. In Elaine, Arkansas in 1919, Black sharecroppers, some who had just come home from fight in the Great War, were gathered in a building to organize a union to help secure fair prices for the cotton they'd grown. White plantation owners and a white mob, surrounded the building, shooting inward, which caused a stampede of people trying to save themselves. Eventually the whites burned down the building to destroy the evidence of the bullet holes. Four or five white men were killed and many blacks, probably over 100. When the event was over, twelve blacks were arrested, hastily tried, and sentenced to death for the "murders." These twelve men were innocent but were found guilty by a justice system not interested in justice.

When a black lawyer, Scipio Jones, learned of the men's plight he set to work to set them free. Along the way he wrote a legal brief that made it to the Supreme Court, the first written by a black lawyer considered by the highest court, and through dogged determination won the freedom of all twelve men. The authors, Sandra Neil Wallace and Rich Wallace, were doing research on that landmark case, Moore v. Demsey, when they uncovered this remarkable story of a self-taught, once enslaved attorney, Scipio Jones. They said about the decision to write his story, "One hundred years after the Elaine Massacre, we were surprised that no one had written a book for teenagers about Scipio Jones or the Elaine Twelve men." So they set out to correct the record, to let the world know about this amazing man and what he did for these twelve men and blacks into the future.

Posted by Anne@HeadFullofBooks at 5:13 PM