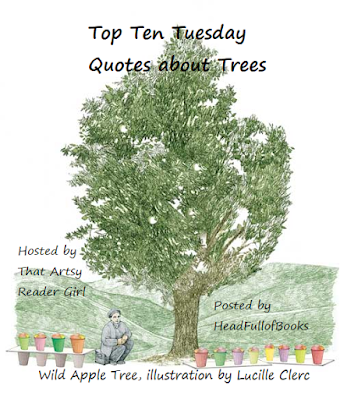 Currently I am reading the book Around the World in 80 Trees by Jonathan Drori, beautifully illustrated by Lucille Clerc. It is so delightful and I am learning so much about special trees around the world that I decided to dedicate this Top Ten Tuesday post to quotes about trees.

“There's a Chinese saying. 'When is the best time to plant a tree? Twenty years ago.' "
The Chinese engineer smiles. "Good one."
"When is the next best time?" "Now."
"Ah! Okay!" The smile turns real. Until today, he has never planted anything. But Now, that next best of times, is long, and rewrites everything.”
― Richard Powers, The Overstory

“My mother was right. There was a whole world in that tree, and so there is in every tree. They warrant our appreciation, and many of them need our protection.”
― Jonathan Drori, Around the World in 80 Trees

“Of all the trees we could've hit, we had to get one that hits back.”
― J.K. Rowling, Harry Potter and the Chamber of Secrets

“Her eye fell everywhere on lawns and plantations of the freshest green; and the trees, though not fully clothed, were in that delightful state when farther beauty is known to be at hand, and when, while much is actually given to the sight, more yet remains for the imagination.”
― Jane Austen, Mansfield Park

“A seed is alive while it waits. Every acorn on the ground is just as alive as the three-hundred-year-old oak tree that towers over it. Neither the seed nor the old oak is growing; they are both just waiting. Their waiting differs, however, in that the seed is waiting to flourish while the tree is only waiting to die.”
― Hope Jahren, Lab Girl

“Listen to the trees talking in their sleep,' she whispered, as he lifted her to the ground. 'What nice dreams they must have!”
― L.M. Montgomery, Anne of Green Gables

“You know me, I think there ought to be a big old tree right there. And let's give him a friend. Everybody needs a friend.” ― Bob Ross (painter)

“Trees are poems that the earth writes upon the sky.”
― Khalil Gibran, Sand and Foam

“It is easy to become besotted with a willow. The Rapunzel of the plant world, this tree appears as a graceful princess bowed down by her lush tresses, waiting on the riverbank for someone just like you to come along and keep her company.”
― Hope Jahren, Lab Girl

“She loved the air after a hard rain, and the way a forest of dripping leaves fills itself with a sibilant percussion that empties your head of words.”
― Barbara Kingsolver, Prodigal Summer

“A tree’s most important means of staying connected to other trees is a “wood wide web” of soil fungi that connects vegetation in an intimate network that allows the sharing of an enormous amount of information and goods.”
― Tim Flannery, The Hidden Life of Trees: What They Feel, How They Communicate

“Planting trees, I myself thought for a long time, was a feel-good thing, a nice but feeble response to our litany of modern-day environmental problems. In the last few years, though, as I have read many dozens of articles and books and interviewed scientists here and abroad, my thinking on the issue has changed. Planting trees may be the single most important ecotechnology that we have to put the broken pieces of our planet back together.”
― Jim Robbins, The Man Who Planted Trees: Lost Groves, Champion Trees, and an Urgent Plan to Save the Planet

“Jaime had never realized that trees made a sound when they grew, and no-one else had realized it either, because the sound is made over hundreds of years in waves of twenty-four hours from peak to peak. Speed it up, and the sound a tree makes is vrooom.”
― Terry Pratchett, Good Omens: The Nice and Accurate Prophecies of Agnes Nutter, Witch

Posted by Anne@HeadFullofBooks at 12:41 PM