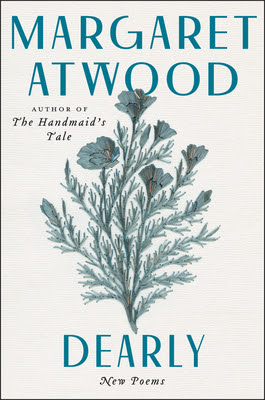 When I heard that the author of The Handmaid's Tale and Oryx and Crake, Margaret Atwood, had published a volume of new poems, the first in over ten years, I was skeptical that I'd like it. My past experience with poetry collections by some of my favorite authors, Kingsolver, LeGuin, and L'Engle among them, left me wanting when it came to their poems. Apparently the skill set for writing excellent prose and excellent poetry are not the same. With this in mind, I opened Dearly: New Poems with some trepidation.  Could Atwood's poetry live up to her prose?

The collection of poems in Dearly are divided into five sections. Within each section it is not always clear if there is a theme. I guess that is why the sections are unnamed. Generally speaking I'd say the overall theme of the collection is our humanness: what we worry about, our environment, love and loss, and the trials of aging. Often poems start out lightheartedly and end with some deep thought about the bleak future. More than once I spied the prose writer of futuristic or dystopian-themed novels peeking out from the poems.

The first two sections of poems seemed unremarkable to me. In fact, I remember thinking "Mary Oliver she ain't." Which, of course, is an especially unfair thought since I had just consumed four of Oliver's poetry books in rapid succession so her style was clearly in my mind. But then, near the end of section two, a set of eight poems titled "Songs for Murdered Sisters" caught my attention and my breath. I realized as I read them that I was reading something personal. Someone's sister was murdered and the grief that was left behind was palpable. In the fourth poem of the set, "Dream", the dreamer imagines the sister is still alive: When I sleep you appear / I am a child then / And you are young and still my sister / And it is summer; / I don't know the future, / Not in my dream... Heartbreaking stuff. As it turns out, with a little research I learned that the poems were written in honor of the sister of a famous Canadian opera singer, Joshua Hopkins, who was murdered by an ex-boyfriend. In this set of poems Atwood's passion for feminist rights really shines out. In the poem, "Lost", these lines make the point clearly: So many sisters killed /Over the years, thousands of years / Killed by fearful men / Who wanted to be taller...

If I were titling Atwood's five sections, section three would be called "Paranormal Activity" with fun and funny poems about werewolves, zombies, aliens, and sirens filling most of the slots. My favorite of the lot is "Zombie" which incorporates a quote from the poet Rilke in the first stanza: There you have it: zombie. / Did you always suspect? / "Poetry is the past / that breaks out in our hearts" / like a virus, like an infection. It goes on to describe how poems are always going on about dead people who aren't really dead. Like the Play-Doh monster you made when you were four and thought you squashed now shows up years later on your doorstep. Stay dead! Stay dead! you conjure, / you who wanted the past back. / Nothing doing... But Atwood warns us in the last lines: The hand on your shoulder, The almost-hand: / Poetry, coming to claim you. Isn't that delightful and fun? Poetry does pull me back in time to events and feelings I thought I'd lost or stuffed down.

"Climate Change Horrors" would be my name for the fourth section. These poems are decidedly pessimistic about our future and are disturbing.  In the aptly titled poem "Sorcerer's Apprentice", we are reminded about the wizard or the Devil who will give us anything we want with a magic word. Some idiot wishes for salt, / and out comes salt, more and more, / but he fails to get a handle / on the charm to turn it off / so he throws it into the sea,... So it goes with every wish and word until the Sorcerer is dead and the instructions are lost, and the magic machine grinds on and on / spewing out mountains of whatnot / and we throw it all into the sea / as we have always done / and this will not end well. The emphasis is mine. I agree. Our handling of the climate emergency is not going to end well, at least not based on our current pace.

Another poem in this section asks if children will have to grow up without birds, crickets, asters...and then asks, Oh children, will you grow up? The first time reading through I read this literally. Will we all die? Is there no future for our children? The second time though I read it with some sarcasm, thinking about all the climate-change deniers on our planet and I want to yell, "Will you grow up, please?!"

The last section, where I really think Atwood's poems really shine, I'd title "Aging." Here she seems to tone down the rhetoric and looks at her own life and her mortality, often grieving the loss of loved ones. After conducting a little more research I learned that Atwood's life partner died in 2019 after several years of declining dementia. In the poems "Mr. Lionheart" and "Invisible Man" we get a glimpse of how difficult it must be living with a person who is disappearing. What is it he forgot / this last time? / I don't mean the keys, the hat. / I mean his tawny days, / the sun, the golden running... I remember that feeling when my husband's Granny started to disappear. She no longer remembered me and my husband was still fifteen-years-old in her memory, her daughter no longer dead. It makes me cry just to remember it. In fact, I think I cried as I read every poem in this section. The poem which gave it's name to the book, "Dearly", being the most emotional for me, ends with these lines: Sorrow: that's another word / you don't hear much any more. / I sorrow dearly.

Dearly is one of those poetry collections one should probably read two or three times to really mine the depths of all the treasures hidden within it. The poems are not all equal in elegance or dripping with meaning but that does not mean they don't have value. While I love Oliver's poems for their ability to make me feel and appreciate nature and all living beings, Atwood speaks more to my need for human  and social awareness. Ella Tierney, writing a review of Dearly for the Wesleyan Argus, says it this way:

It felt really good to read a work of literature that tries earnestly to deal with the confusing mess of a world that we live in. The consistency of grief and tragedy in the 21st century is exhausting and detrimental, and yet, for many of us, life continues on, undeterred. How do we reconcile these two things: collective sorrow and the desire for individual joy? This is a paradox Atwood tries to approach within this collection.

We are living in troubled and often lonely times. Dearly captures the essence of both and in a small way sets out to helps us cope. I highly recommend this collection of poems to you. And don't forget...poetry is coming to get you! 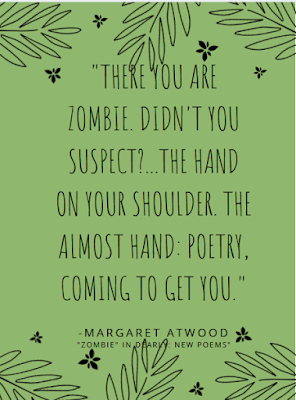 Posted by Anne@HeadFullofBooks at 1:15 PM