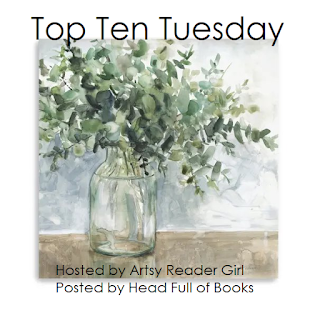 Another "Poetry Month" theme for my Top Ten Tuesday posts, today I am off-the-board listing

Clap When You Land by Elizabeth Acevedo---
Amazingly the story is told from the point-of-view of two narrators and the poetry for each person's voice is decidedly different. Excellent.

Poet X by Elizabeth Acevedo---
An award-winning novel by the same author as above. It is about a girl who finds slam poetry as a way of coping with her family life. Oddly for a novel written in verse, none of the slam poems were included.

Shout by Laurie Halse Anderson---
This autobiography, written in verse, is by the author of Speak. It covers tough topics but one can understand where the 'inspiration' for her award-winning novel came from.

Audacity by Melanie Crowder---
This novel written in verse is based on a real-life person, Clara Lemlich, who fought for the labor rights of women working in the clothing industry after the Triangle Shirtwaist fire that killed so many women. Crowder's poetry is top notch.

An Uninterrupted View of the Sky by Melanie Crowder---
Another excellent book based on a real-life problem in Columbia: the incarceration of poor people who cannot pay for legal assistance. A tough topic but the story was beautiful in verse.

Blood Water Paint by Joy McCullough---
Based ona real historical figure and a phenomenal female artist, Artemisia Gentileschi, who was painting during the Renaissance when only men were allowed in the artists guilds. When she encounters a situation that would break most people she kept her head up and kept painting. I was tremendously moved by this book, written in verse.

Long Way Down by Jason Reynolds---
Reynolds is an awesome writer and I was even more impressed by him when I read this book which is about a boy who is considering the use of a gun as retribution for the death of a sibling. Boy, this book is powerful.

October Mourning: A Song for Matthew Shepard by Leslea Newman---
Matthew Shepard was murdered because he was gay. This book written in beautiful verses about his life and his last day. Powerful and heartbreaking.

Voices: The Final Hours of Joan of Arc by David Elliott---
Elliott is a poet and experiments with a variety of poetic forms in this novel about a historic heroine. This is one to savor.

Ordinary Hazards by Nikki Grimes---
In her own voice, author and poet Nikki Grimes explores the truth of a harrowing childhood in a memoir in verse.
-Anne
Posted by Anne@HeadFullofBooks at 9:22 PM