Poetry seems to call out to me and I listen 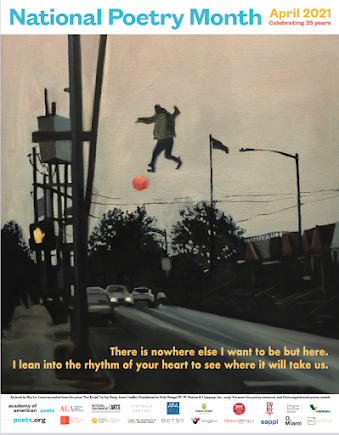 April is National Poetry Month. If you read my blog very often you are probably sick of me telling you this. Heck, I'm kinda sick of me telling you, too. When I was in charge of high school library I had so many poetry books at my finger tips I didn't have to work very hard to find something new to read each April. Now that I am retired I had help from the Internet and from my public library in securing a few new (and old) volumes of poetry to consume this month. And I found a fair-sized pile of them, too: five Mary Oliver poetry/essay books, one National Book Award winner, one by an old favorite, one that should be listened to instead of read, one by the author of A Handmaid's Tale, and one by an up-and-coming poet who is super popular right now. I've immersed myself in verse. Some of the poems made me laugh, others left me feeling nothing, while others simply took my breath away.

"Good poetry emerges from the wellsprings of the human spirit, and if we are in the right place in ourselves to hear it, it can call forth our own inarticulate knowings, and offer a mirror into the core and the truth of our own life. It can show us the spark, the fire at our center, which, in the end, is the only thing in us likely to endure, the one thing worthy of our true name." -Roger Housden

1. The Hill We Climb: An Inaugural Poem for the Whole Country by Amanda Gorman. This small volume is just one poem. The poem of 2021. Amanda Gorman, its author, swept into our lives and our hearts at just the moment when we thought everything was broken beyond repair: race relations in the country; politics; religion; rights for LGBTQ; COVID-19; Trump and all his lies culminating on an insurrection attempt on January 6th.  And yet, here was Amanda Gorman, a beautiful black woman, stepping up to the podium at the inauguration of Joe Biden telling us, through her poetry, that we will be okay. That we have a hill to climb but we can do it. "Somehow we've weathered and witnessed / a nation that isn't broken, /but simply unfinished. And that we will "Let the globe, if nothing else, say this is true, / that even as we grieved, we grew, / that even as we hurt, we hoped, / that even as we tired, we tried, / that we'll forever be tied together, victorious. The world stopped as we listened and as we breathed. We will be okay. She finished the poem like it was a prayer: 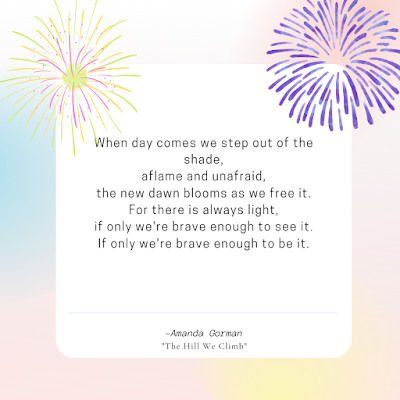 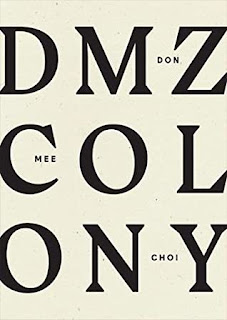 2.  DMZ Colony by Don Mee Choi. It has been over sixty years since the DMZ, the Korean Demilitarized Zone, was set up between North and South Korea. It is likely the most militarized border on the whole planet. In this collection of poems, memoir, collages, letters, drawings, and photos Don Mee Choi's transformative "DMZ Colony comprises an imaginative and highly multimedia mode of accessing a space where human perspective is forbidden" (Chicago Review of Books). It won the National Book Award for Poetry last year. The judges had this to say about the collection,

Devastating and vigilant, this bricolage of survivor accounts, drawings, photographs, and hand-written texts unearth the truth between fact and the critical imagination. We are all “victims of History,” so Choi compels us to witness, and to resist (National Book Award).

I know very little about the Korean conflict, except for what I learned on M.A.S.H., which of course doesn't count. As I read through the book I was very confused, especially as specific names were mentioned and details of their horrible treatment at the hands of the other side were explored. Though the poems were not clear to me intellectually, the feeling tone of them hit me hard. As I closed the book I just sat there stunned. What just happened?

I really won't recommend DMZ Colony to anyone to read except if I happen to run into a Korean War history buff or a person who earned their MFA in poetry. The poems are so complex and require more thought than the average reader (me) is willing to give. I think that this is the kind of poetry that scares people away from reading poetry. I understand why DMZ Colony won the National Book Award, it is stunning and inventive, but I'm guessing that selections like this put more people off than attracts them to the art of poetry. 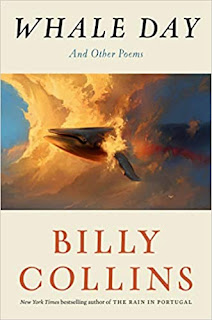 3. Whale Day and Other Poems by Billy Collins. In almost completely opposite ends of the spectrum, Billy Collins' poems could be described as poems for the common man. His poems are easy to read, not too long, or dark, or serious. In fact a bunch of them are quite funny and I found myself reading out lines or whole poems to my husband who just wanted to go to sleep. For example, the first poem in the collection is "The Function of Poetry," where Collins describes the things he did that day in mundane detail. All of them boring.
...and that is when I realized
that the function of poetry is to remind me
that there is much more to life
than what I am usually doing
when I am not reading or writing poetry.
Ha. You've got to love a guy who makes fun of himself and of his craft. That said I have to confess, however, that though I enjoyed the book, I don't think my life is changed in any way from it. Amanda Gorman made me feel better about our country and where we are in this moment of time. Don Mee Choi made me look where I didn't want to look and to feel strongly about the victims of History. Billy Collins made me laugh which I guess, when you look at sideways, may have changed my life for the better after all. 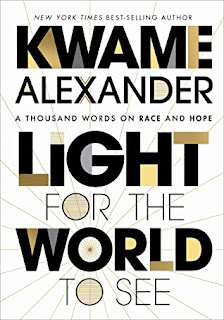 4. Light for the World to See: A Thousand Words on Race and Hope by Kwame Alexander. You many recognize the name of this poet. He is an award-winning author of many middle grade and YA books, The Crossover is one example. Light for the World to See is small collection of three poems for adults. The first, "American Bullet Points" is about the killing of George Floyd. The second, "Take a Knee", is about the activism of Colin Kaepernick. And the third poem, "The Undefeated", is about the election Barack Obama, our first black president.
In the Forward, Alexander says that this book, these poems are his way of "lifting his voice, using his voice to say something...about racism, about Black triumph, about solidarity. About police brutality and the devastating impact on Black America, on America. This book is a sort of wading into the water, a roll of thunder, a call to action. A rally in verse."
The font that is used is large and dramatic so I wasn't surprised to learn that the poems are meant to recited in rap or spoken word. As I read through the poems I knew I wasn't getting the emotional punch that was intended so I went ahead and purchased the audio recording of Alexander reading his poems to music. WOW. Was that worth the money! Each poem popped in intensity as I thought back over the events of the last year and cried about the frustrations Blacks feel about not being accepted for who they are in their own country. I highly recommend that you find yourself a copy of the audiobook of Light for the World to See to experience these poems, too. (The recording only takes 13 minutes of listening. Unfortunately the sample available on Amazon is only of Alexander reading the Forward, not the poems.) These three poems should be required listening for all Americans. We all want to be part of positive change for our country, for the world. This is good place to start.
And one last poem I will share made me think of today with all the beautiful cherry trees blooming up and down our street: 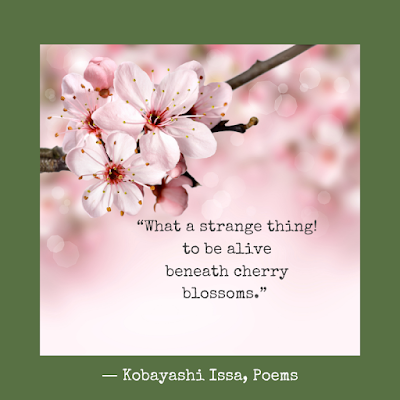 I hope I've convinced you to read some poetry today!

Posted by Anne@HeadFullofBooks at 3:20 PM