Review and quotes: CALL THE MIDWIFE 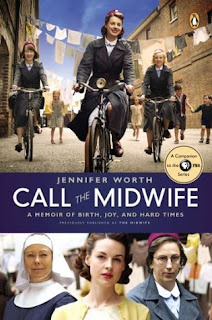 Title: Call the Midwife: A Memoir of Birth, Death, and Hard Times by Jennifer Worth

Why did I start this? I must have been mad! There were dozens of other things I could have been--a model, air hostess, or a ship's stewardess. The ideas run through my head, all glamorous, highly paid jobs. Only an idiot would choose to be a nurse. And now a midwife...

Summary: The memoir that formed the basis of the wildly popular BBC series by the same name. In the late 1950s a then twenty-two-year old nurse named Jenny Lee moved to London's East End slums to learn how to be a midwife, taught by midwife nuns. In this memoir, written fifty years after her experiences during this time, Jenny Lee recounts stories of delivering babies for a colorful cast of women and what life was like for these women who often lived in very challenging conditions.

Review: During the recent lock-downs and stay-at-home orders my family has finally started to explore Netflix and all the old series everyone else has been watching for years. "Call the Midwife" is one such series. We started watching it about a month ago and quickly made our way through its nine seasons in less than three weeks, often watching more than one episode a night. We all loved the series so much and enjoyed the whole cast of characters: Jenny, Trixie, Chummy, Sister Monica Joan, etc. When I learned that the series was based on a series of books written by Jenny Lee (Worth) I was delighted to give them a try.

Unfortunately, I found this book lacking the emotional and personal punch I was expecting. I don't think there was a single TV episode that I didn't find myself in tears at least once. The opposite was true with the book. I felt detached from the action and didn't warm much to any of the real-life characters with the exception of Sister Monica Joan. Several of the people who populated the episodes were barely mentioned in the book which I found to be greatly distressing. I liked all of the characters on the TV series so much and to learn that they were merely names in the book made me think they were not really friends, as one would think from the series.

Some of the other differences were interesting and noteworthy. First, the nuns were running a school, of sorts, for those women who wanted to be midwives. That point was never made clear on the TV show. Jenny, whose character was very confident on TV, was not nearly so self-assured in the book, often getting herself bawled-out by Sister Evangeline. A lot was made of the Cockney accent used by people living in London's East End, with an afterward of how to understand the dialect and an explanation why it was so difficult to put into print.

I usually like books better than the movie or TV show they are made into. In the case of Call the Midwife, the opposite is true. This left me wondering if I would have liked the book better if I had read it before watching the series. I give the book 3.5 stars.

Posted by Anne@HeadFullofBooks at 4:28 PM