Review and quotes: THE VIOLET HOUR 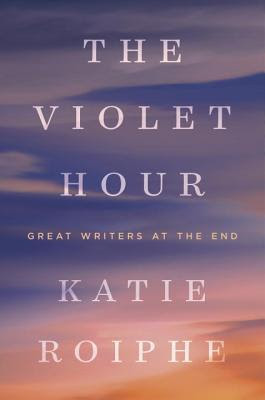 Title: The Violet Hour: Great Writers at the End by Katie Roiphe


Prologue: I forgot how to breathe. I was being pulled underwater. The taxi driver carries me into the emergency room because I've passed out in the cab and my mother can't lift a twelve-year-old.


When Susan was sixteen, she wrote in the notebooks, "It is a bullying fear of death, the stretching, the straining to comprehend the incomprehensible...'I will die too'...But how is it possible for me to stop living...How could anything be without me?"

Summary: The subtitle succinctly gives a summary of the book: greats writers at the end [death.] The referenced great authors are: Susan Sontag, Sigmund Freud, John Updike, Dylan Thomas, Maurice Sendak, and in an epilogue, James Salter. The 'end' isn't just what happened at the end of each of these writers' lives, but what they thought about death in general. All of them, with the exception of Salter, had spent a good deal of their lives focused on death, fear of dying, or warding it off.

Review: It surprised me how much I enjoyed reading The Violet Hour. I'm not familiar with the works of any of these writers outside of Sendak, and what person who grew up in the last fifty years isn't familiar with his works? So I wasn't attracted to this book because I wanted to learn more about these writers. Nor am I particularly fascinated by the topic of death as my faith gives me a strong assurance that there is life after death. So why did I feel compelled to read it in the first place? I don't recall why I placed it on my TBR list but I suspect some other blogger spoke about it back in 2016 when it was published and it sounded like something I'd like as I always seem to be attracted to books about books, this seemed to fall into that category. When I came home from the library with the hugely hilarious book haul of twelve books last week I sat down and read twenty pages of so of about half of them, trying to determine which of them I'd actually have time to read. By page ten I knew this is a book I'd have to finish. Why? The writing was so strong and captivating.

Katie Roiphe filled her book with intimate and surprising revelations about each of the highlighted writers lives. She obviously did a LOT of homework so she could fill each section with examples from the writers own works but also interviews with associates and loved one making each writer come alive in my imagination. Since many of these writers died recently, there are even TV/radio interviews with the authors themselves.

Roiphe doesn't say it directly but one is led to believe by reading the prologue that she herself is fascinated by death since she was very near death several times in her childhood, as we see in the opening lines about the near-fatal taxi ride. Susan Sontag, considered a consummate intellectual by many, couldn't imagine dying (Friday56 quote) or life going on without her. She did seem to be able to fight off death after battling cancer and winning two times before succumbing to it after a third cancer appeared. Freud refused to take any painkillers stronger than aspirin even though his throat cancer and open sores of the mouth clearly caused great pain. He didn't want his sense dulled at the end and wanted to work as long as he could. John Updike worked on poems from his hospital bed after he received a shocking diagnosis of lung cancer. Even when he was too tired to go one he still forced himself to finish his last book, a collection of poems written about his end.  Dylan Thomas seemed to know that he was going to die. Or did he kill himself with drink? At any rate so many of his poems point to clear obsession with death and/or warding it off. "Do not go gentle into that good night..." Sendak, who had a very sad childhood and experienced a heart attack at age 39 incorporated many of his fears or thoughts about death into his children's book. One theme, which I completely missed when I read his books, was adults attempting to bake children into cakes or pies. When he was a child he was reminded by his parents that he had no right to be happy since his relative had been baked in the oven during the Holocaust. Can you imagine a childhood filled with that kind of despair?

Roiphe's interview with James Salter was described as a epilogue because he was alive at the time and she wanted to talk to him about death because he seemed to so clearheaded about it in his books. He, unlike the other writers, said he didn't think much about it even though he was in his eighties when she interviewed him. During the interview Salter asked Roiphe what she thought about her project to write about these authors and their deaths and she answered that their deaths kind of reassured her. Salter asked for examples to highlight what she meant and Roiphe relayed several stories told to her about the other five. Salter listened intently and then said, "We make our own comfort." Roiphe realized that that was it. Death stories can bring us comfort.


The beauty I found in these deaths was what surprised me. The life rushing in, the vastness of the work, the great, sometimes deranged seeming courage, the mad love in the last moments...Part of the creative work these people did, their art, was their lives themselves. There is something glorious in the conflagration of everything at the end. The beauty was what ambushed me.

I felt a little ambushed by this book, too, but in a good way.

-Anne
Posted by Anne@HeadFullofBooks at 4:13 PM