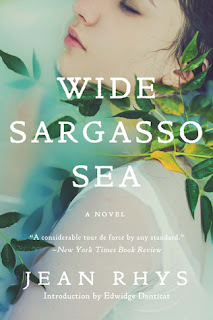 Yesterday I finished my Classics Club Spin selection, Wide Sargasso Sea by Jean Rhys, and I hated it. In fact, it was so bad it makes me wonder if I should even be in the Classics Club if this is the type of book that is considered a classic. I was pretty excited to read it since I like Jane Eyre and it is a story from Bertha's point of view. Bertha is the crazy woman in attic, Rochester's first wife. It dawned on me that poor Bertha had received a bum warp from Charlotte Bronte and it would be interesting to see the story from her point of view. Well, let me tell you, I wish I hadn't bothered.

Here is what the book blurb for the book says:


"Jean Rhys reputation was made upon the publication of this passionate and heartbreaking novel, in which she brings into the light one of fiction's most mysterious characters...Set in the Caribbean, its heroine is Antoinette Cosway, a sensual and protected young woman who is sold into marriage to the prideful Rochester. In this best-selling novel, Rhys portrays a society so driven by hatred, so skewed in its sexual relations, that it can literally drive a woman out of her mind."

That sounds pretty intriguing but the writing is so confusing, it is nearly impossible to tell who is talking, and includes words and slang which are never defined. The book is separated into three parts. The first part is narrated by Antoinette (renamed Bertha by Rochester) beginning a few years after the end of slavery on the island when the x-slaves were understandably hateful and vindictive. The second part is narrated by Rochester, though no one ever uses his name. And the last part is set in the English attic from the point of view of Bertha. It was the only part that was even partially recognizable and understandable.

In the back of the book are book discussion questions. I wish I'd seen them before I started reading. The questions themselves helped me to understand the text a bit better. I decided that I would attempt to answer a few of the questions just to help me feel like I didn't completely waste my time.

1. Q-Happiness always seems to elude Antoinette. Why can't she simply be happy with her life?
A- Antoinette's life has been fraught.  Her father died right after the slaves were freed so she was hated by blacks because her parents were slave owners and by whites because she and her mother were so poor. She seems to also be terrified of voodoo and bad spirits so every evening/night she is spends in terror. She didn't want to marry Rochester but her mother had gone mad and she had few options. It was as if things just happened to her.

2. Q-What is the racial situation when Antoinette was growing up? Did it seem like she and her mother understood this?
A- As I mentioned above, they were living on the plantation after the slaves were freed and due to the death of her father, were also poor. The natives called the women "white cockroaches" or "white niggers" clearly non-complimentary terms. They still wanted servants but didn't trust them and couldn't pay them well.

3. Q- What are the relationships between lust, power, sex, and money in the novel?
A- Clearly Rochester marries Antoinette for lust and possibly for money. Sex is not healthy. Antoinette tricks Rochester into seducing her after he had already stopped sleeping with her. Later he sleeps with her maid in retaliation. Both are miserable. Though Antoinette's mother had no money, she married Mason, so Antoinette came to marriage with a dowry. The islanders were very critical of Rochester for taking her money.

4. Q- What is the effect of reading the story from different points of view?
A- I found it to be extremely confusing. I read somewhere that Rhys tried to write in a spare style (think Hemingway). She accomplished this, but left out important clues in the writing like who was talking since they never named themselves.

5. Q- Many of the characters are mad and many others are drunk. How did this impact the story?
A- In my opinion, I couldn't tell the difference between the drunks and the mentally ill. It just added to my confusion.

6. Q-Rochester starts calling Antoinette "Bertha". What does this say about their relationship?
A- Antoinette herself says that "names are important" and they are. It was a mean and demeaning thing he did to try and put her down.

7. Q- There are two fires in Wide Sargasso Sea. How are they similar?
A- The first fire is set by natives who are almost zombie-like. As the house goes up in flames, the pet parrot flies out of the house with feathers ablaze. The bird's death is the last straw for Antoinette's flail mother. The second fire, we know, happens in England in Rochester's estate, set by Bertha. Even though he tries to rescue her she runs to the roof and spreads her arms, like wings, which are on fire before she dives to her death. This fire leads to a different kind of rebirth for Rochester.

8. Q- What is a Sargasso sea?
A-It is an area of the Atlantic between The Caribbean and the Azores where there is a lot of brownish seaweed growing. I guess this means that the distance between/and reality of England and Jamaica are unknown to the other person.

I checked out the reviews of  Goodreads readers and there were several 5-star reviews (no doubt English Literature majors) but many, many more 1-star reviews. These folks hated the book just like me. Save yourself time. Don't read it.

Posted by Anne@HeadFullofBooks at 7:42 PM