Writing a review for a hard-to-understand novel: The Virgin Suicides 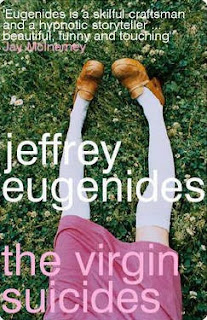 Earlier this year I read Dear Fahrenheit 451 in which author Annie Spence gushed about her favorite books and said goodbye to books she no longer needed/wanted in her life. The book she gushed about the most and talked about rereading often was The Virgin Suicides by Jeffrey Eugenides. I had run into the movie The Virgin Suicides several years ago when I was switching channels on TV. I watched a few minutes and thought better of it and switched off. I also had read Eugenides award winning Middlesex and loved it. So I was aware of the book, sort of, when I read that it was Annie Spence's favorite. That was on my mind when I ran into the audiobook at the local library, and I checked it out with a handful of others as possible "listens" for our long car trip to California.

I make this rambling introduction as a way of saying, I didn't know what I was getting when I checked The Virgin Suicides out.

Let's see if I can adequately summarize the book. To begin with -- and everyone knows this from the title -- there are suicides. Five suicides to be precise and all those who die are sisters. The first sister to kill herself is the youngest at age eleven, the other four following her in death a year later after everything falls apart. The story is told by a collection of neighborhood boys who get together twenty years later to try to piece together what happened and why. The narrators refer to themselves as "we" and the reader is never sure how many boys are telling the tale---four, seven, nine? Who knows? It became an obsession of mine to figure it out and I never did.

The time period is the 1970's in a Detroit, Michigan suburb, probably like the town where Eugenides grew up. The Lisbon sisters were raised by a very strict, repressive mother and a passive father. Though the girls are forced to wear baggy, unflattering clothes, the boys are infatuated with them and think the girls are lovely. Over the course of the year between the first suicide and the rest, the boys collect and save items they think have some importance in helping them understand the girls. They call these items "exhibits" as if they are presenting evidence at a trial. The boys seem to be obsessed their whole lives with WHY the girls were so obsessed to end their lives.

Though there are five suicides in this novel, I wouldn't say that suicide is the theme. The book is really about what it's like to be an adolescent, not really understanding the opposite sex, yet being obsessed with them. Some reviewers say Virgin Suicides is a coming-of-age novel, but I reject that characterization because I don't want to think that suicide is some kind of rite of passage. Other proof that COA is an inaccurate description is that the narrator(s) -- twenty years after the suicides -- still don't understand the girls. Shmoop says the novel is really an anti-coming-of-age story. Ha! Another theme that engulfs the whole Lisbon family is the tragedy of isolation.  The girls are pulled out of school, the father loses his job, they stop participating in neighborhood activities like fall leaf-raking. As the house falls into disrepair, so do the lives inside.

As depressing as the topic of suicide is, real humor comes through, mostly in the comments the boys make to one another. Many of these comments reveal their misunderstandings about the mysteries of the opposite sex: tampons, bras, and what they could see from the windows of their rooms.

One mystery to me is why no one did anything to help this family in crisis. The neighbors talked about what was happening but didn't step up. The school counselors witnessed what happened after the first suicide, yet barely lifted a finger to offer support though one was willing to smoke with Lux, the promiscuous sister, during their sessions together. It always bothers me when schools are shown in such a negative light.

So did I like the book? Good question. I wouldn't say "like" but I was very intrigued by the writing. The narrator as a group of men -- earlier boys with crushes -- like a Greek chorus, was extremely unique and clever. I could just picture these boys gathering their exhibits and pondering over them. There is no denying that Eugenides is a superior writer, but I am not sure I would ever tell anyone to read this book. I honestly am not sure I understand it. But many, many readers before me love the book, often rereading it with regularity. So I will leave you with that thought and a link to a review written by a teenager herself. I think her review gets much closer to understanding what Eugenides had to say in the Virgin Suicides than my review. Teenager reviews VS.

Posted by Anne@HeadFullofBooks at 9:14 AM