And so I begin...The Name of the Rose 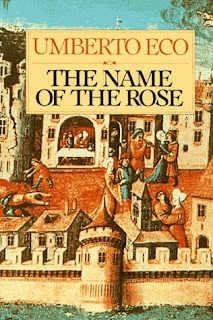 Last Wednesday when the Classics Club spinner stopped moving it was pointing at #9. Consulting my list, The Name of the Rose by Umberto Eco was the book filling that slot. OK, that is the book I will read for this spin event. Now to find out something about the book and the author.

Several years ago I read and marked up a book I found on the sale table at Borders Books (remember them?) called 501 Must-Read Books. The Name of the Rose by Umberto Eco was one of the books listed as a must-read. I didn't add all 501 books to my TBR list but I added Eco's first novel. I don't remember why.

Fast forward to this week,  now it was time to do a little reconnaissance on the book. Why read The Name of the Rose and what is the book about? What I discovered got me pretty worried.

First, The Name of the Rose is LONG, over 500 pages long. It is also translated from Italian, though everyone remarks that the translator, William Weaver, was very good.

Secondly, it is set in set in 14th Century Italy in at least one (maybe more) monastery and full of Latin phrases. One reviewer said that there was some Latin phrase on just about every page. I will obviously gloss over these since I don't read Latin.

Thirdly and worst of all, the author purposely made the first 100 pages especially dense and difficult to read. Oh great. What have I gotten myself into?

So why should I read it? Why does anyone read it? It is too long, it is too dense, and it uses a language no one uses anymore. That sounds like a bust all the way around. But according to Kevin DiCamillo, who wrote an article on its thirtieth year anniversary of publication, "the book is essentially a Sherlock Holmes story, set in a monastery---with a sex scene." What? Well, I wasn't expecting that. Eco himself called the book simply a "Whodunit novel. In other words, who is killing the monks?" But I can think of a lot of whodunits which are a lot easier to read. And DiCamillo says, "Who cares. I can't read Latin and know nothing about 14th century church politics."

But apparently a lot of people do care. And have cared. This book has been the most unlikeliest of bestsellers since it was first published in 1983.


And ultimately the book does not disappoint. Indeed, it dazzles. If ever there was a tour de force performance by a first-time novelist who created a literary and popular hit—make that a “craze,” given that the book spawned not only a movie, but a board- and video-game—this was it. (DiCamillo)

OK, now I am getting kind of excited.  The book dazzles!  Wow. That is a recommendation worth exploring.

So I begin. I started by purchasing the audiobook from Audible. A good choice so that someone else can read the Latin and French phrases that are scattered around the text while I zone out. I also have placed a hold on the library copy, though will have to wait a few weeks for it. That way I can look at the text and have an idea what the reader is up against. Between yesterday and today, I have listened to an hour and half of the book and the counter says I am on chapter 17 of 193. I have a long way to go. But I have begun!

Posted by Anne@HeadFullofBooks at 12:34 PM