Review: Life Inside My Mind: 31 Authors Share Their Personal Struggles 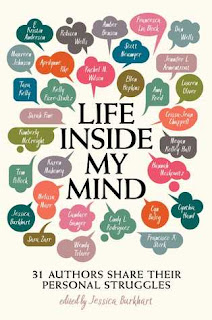 Francisco X. Stork, Sara Zarr, Maureen Johnson, Cynthia Hand, and 27 other contributors to this collection are all YA authors. In their essays they all talk about their personal struggles with mental illness or the struggles of a loved one. Though writers all, many award-winners, some confessed writing this essay was very hard, the hardest thing they'd ever written. One, Sara Zarr, even confessed in her essay to something she has never told her therapist, that she hits herself when she gets anxious. Depression, anxiety, OCD were the most common topics discussed, though some spoke of PTSD, bi-polar disorder, addiction, self-harm, and suicide-ideation. Most told their story from the beginning point of recognition, through the symptoms and chaos of their undiagnosed/untreated illness, to the point of treatment and self-care. While others' essays were more about what it is like to live inside their skin. All were hopeful and helpful and would be a good launching pad for discussion.

A few of the essays really touched me on a personal level. Cynthia Hand, who co-wrote the hilarious book, My Lady Jane, wrote about the near-suicide of a friend and the suicide of her brother. She had important thoughts on what to do if a friend starts expressing suicide ideation and also how she survived the suicide of her brother, though for about "two years after his death, I was really, really not okay." Having lived through the suicide of several students over my teaching career, I think Hand's advice is very valuable and should be widely distributed.

Franciso X. Stork is the author of two of my favorite YA titles, Marcelo in the Real World and The Last Summer of the Death Warriors. In his essay he talked about his undiagnosed bi-polar disorder and how drinking was his way of treating it, until, of course, the drinking became a big problem. I suspect that is very, very common. People with undiagnosed mental health issues attempt to treat it themselves and their attempts at treatment soon become another problem.

Ellen Hopkins' essay about the fallout of her daughter's addiction to meth, memorialized in her Glass series, was very touching. She is parenting one of her grandchildren now that her daughter can't/won't care for him. This child's troubles are heartbreaking, but Hopkins patience and love it heart-warming.

Usually when I read a book, I know I am reading for myself. I likely won't share anything about the book with anyone, with the possible exception of a blog review. When I started reading Inside My Life, I kept thinking of people who might benefit from reading it, too---relatives, co-workers, friends, students, even my hairdresser. This is an important book with 31 important messages of hope. As Christie Pasquariello, writing for School Library Journal, said, "Perhaps most importantly, the collection's overarching sentiment points toward acceptance and the idea that treatment is a journey. As contributor Tara Kelly writes: 'If anxiety gets the better of me again, that's okay. I give myself permission to fall down and get back up.'" I would say another point of the book is to destigmatize mental illness. How can someone get help if they are ashamed to admit what is going on inside their head?

Inside My Life has earned three professional starred reviews, which you know means a lot to authors. I gave the book 4/5 stars on my rating system. Why not five? I honestly felt that 31 essays was over the top. In fact, around page 200 I decided to skip ahead and only read the essays by authors I was familiar with. Maybe that is the point. One doesn't have to read the whole book to gain value from it. Some essays will speak to a reader whereas others might not. Jessica Burkhart, the author who edited the book, did a nice job curating the project, but I did notice that most of the submissions were by white, female authors, with only a few submissions by authors of color and by men. I'm pretty sure white women don't become mentally ill at a higher rate than other people. That said, the book is still excellent. It should be purchased immediately for every library, public and school, that services teenagers.

Posted by Anne@HeadFullofBooks at 11:17 AM