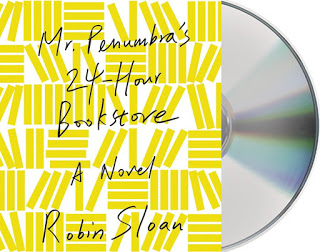 Five years ago I read Mr. Penumbra's 24-Hour Bookstore at the urging of several friends. A few weeks ago I ran across the audiobook at the library and checked it out thinking I would share it with my daughter who doesn't get to read much these days due to having a toddler in the house. I figured she may be able to squeeze in an audiobook during all her car trips into town and back. I was right. She finished it and loved it. Her comments made me realize how much I had forgotten. Time for a re-read (re-listen, as it were.)

Here is part of what I said in my first review of the book:


Readers of Mr. Penumbra's 24-hour Bookstore by Robin Sloan will be treated to a celebration of books AND technology. They will discover a secret society that is not out to dominate the world, or even kill anyone. In fact, this society is very interested in technology, old technology...the printing press.

Clay Jannon is an unemployed web designer. He ends up working for the odd Mr. Penumbra in his 24-hour bookstore as the only graveyard shift employee. Though few patrons walk through the doors at those late hours, half of those that do are even odder than Mr. Penumbra. All are very focused on the books they want, too, and these books are always from the way-back section of the store. Clay is warned his first day of employment to never look inside these books. Who could resist that kind of temptation? What does Clay discover when he gives in to his curiosity? Books written in code. He and his techie friends set out to help Clay figure out what is going on, maybe even unravel the mystery.

As the "plot thickens" the reader is continually confronted with the question, can technology solve all of the problems that confront us? And, do we really want it to?

As I was close to finishing up the book, I turned on the news and heard the commentator use the word "penumbra" in a sentence. Did I hear her right? Is that a word? I had to look it up.


penumbra (noun) is "a space of partial illumination between the perfect shadow … on all sides and the full light" (Merriam Webster's Collegiate Dictionary) Legally penumbra is the implied rights provided in the U.S. constitution, or in a rule. Literally, the term penumbra was created to describe the shadows that occur during eclipses, here it is described the implied powers of the Federal Government (US Legal.)

Now I think the the commentator was using it as the second definition, but I am guessing that Mr. Penumbra, the title character in the book, is a man who lives in the shadows between light and full dark. I love it when I find the the little hidden gems that make the stories richer. He tries to employ new technologies in his efforts to find answers and he is met with resistance from the old guard.

Though not a current book which is getting a lot of love right now, Mr. Penumbra's 24-Hour Bookstore is totally worth it. You can probably find a copy of it on the shelves of your public library in print or in audiobook. Go find it. I guarantee you will enjoy it.

Ari Fliakos was the voice-actor who does a fun and quirky voice very well. Mr. Penumbra's 24-hour Bookstore audiobook was produced by Macmillan Audio in Feb. 2013.

Posted by Anne@HeadFullofBooks at 8:56 PM