Austen in August---It's a Wrap! 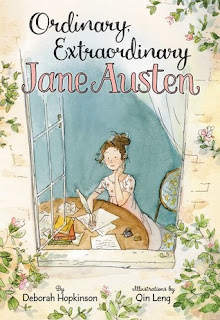 End of the month. End of Austen in August for another year. It was a good month providing me with another opportunity to discover me about a favorite author. Though I didn't read as much as I wanted, when do I? I really enjoyed (am enjoying) what I did get read.

Ordinary, Extraordinary Jane Austen by Deborah Hopkinson, illustrated by Qin Leng
A darling picture book of Jane Austen focusing a lot on what life was like for Jane as a girl growing up in the late 1700s/early 1800s. The illustrations are simply charming. This would be a nice book to provide an introduction to authors for children by a librarian or parent because I doubt that young children will have heard of any of Austen's novels.

Jane Austen's Northanger Abbey: a graphic novel by Jane Austen and Nancy Butler, illustrated by Janet Lee.
I've read four of Austen's novel in graphic form, part of the Marvel Adaptations series, and enjoyed them all. I, however, prefer the stories in their original form. The fun aspect of this graphic novel is how the artist was able to capture the Gothic feel that Austen was going for while penning Northanger Abbey. Several darkly drawn panels let the reader know that Catherine thought foul-play was aloft. One beef I have with the artwork is how similar several of the characters look. Catherine, Isabella, and Eleanor all look interchangeable. Now I, being familiar with the story, took my time to figure out who was who, but I not sure that the casual reader would take the time. Reading this graphic novel did make me want to go back and re-read the original and to re-watch the DVD which I own. I've read all of Austen's novels at least once, Pride and Prejudice and Persuasion at least three times each, but it has been a long time since I read this one. 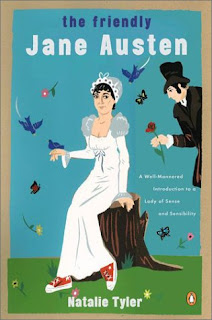 The Friendly Jane Austen: A Well-Mannered Introduction to a Lady of Sense and Sensibility by Natalie Tyler
Oh boy, I am having fun with this book. Ms. Tyler has done her homework and gives Jane Austen fans what they want...more information about Austen. To begin with she asks the question, How Do We Love Jane Austen? Let Us Count the Ways. The reader then takes a quiz to determine what type of fan school he/she belongs in: Janite; Gentle Jane; Ironic Jane; or Subversive Jane. Not surprisingly, I am a Janite through and through.

Next up, Part 1 covers Jane's early life and her juvenilia. What was it like living in those days? What about her siblings and parents? Where did she live and why did they move? How did her writing grow and change? All these questions and more were answered in this section. Text would often be broken up with text boxes with information which seemed like little asides. For example, one text box contained the names of famous people who lived during the same time as Austen---Beethoven, William Wordsworth, and Sir Walter Scott being three on the list. Illustrations related to Austen done by relatives are infrequent but add a nice touch. For example, Jane's niece, Anna Lefroy, made a nice drawing of the Steventon Rectory where Jane was born and lived until she was 24. My favorite bits in this section were samples of and explanations of Jane's early writings. Short quotes from her various stories were shared. And a timeline explanation of each of her pieces of "juvenilia" is very helpful to my understanding.

Part II, where I am currently in my reading of the book, explains each of her major works in detail. In addition to her own research, Tyler interviews college professors with knowledge related to Austen. Each interview is recorded in a short dialogue with the professor answering only one or two questions like, Why aren't Austen's novel considered part of Romanticism movement? or Why study Austen? There is a quiz in each of the seven sections in this part. I just took the quiz: Letter Writing in the Novels. The directions were to match the characters that wrote the following letter with its intended character recipient. I did pretty good but didn't know the quote from Sanditon nor did I guess this one. Can you? (Name the book, the character writing,  and the character recipient. No cheating.)


"A poor honorable is no catch, and I cannot imagine any liking in the case, for, take away his rants, and the poor Baron has nothing. What a difference a vowel makes!---if his rents were but equal to his rants." (I will put the answer in the comments section...how'd you do?)

Part III, which I haven't read yet, is about Jane Austen's legacy---the film adaptations, the continuations, sequels, and spin-offs, JASNA, JA retreats, etc. Can't wait to get to this section.

The book is nicely referenced, with an index, bibliography, and illustration credits section at the end. As I type this post, I realize that I want my own copy of this book for further study and delight. It contains too much information to take in at once and I know I want to go back and look up something is it long after I have to return this copy to the library.

I had a lovey August with Austen

Posted by Anne@HeadFullofBooks at 11:31 AM