Review: The Book of Pearl by Timothee de Fombelle 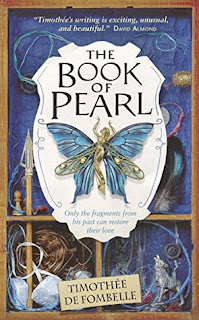 Once upon a time there was a love so deep and committed that it stood the test of time and dislocation from one kingdom to our world.

When Ilian, a young prince, fell in love in love with Olia, a beautiful fairy, it seemed like theirs would be a happily-ever-after relationship. But when Ilian's evil older brother, Ian the crown prince, also falls in love with Olia, trouble strikes the couple. Ian insists that a genie separate the couple. What the genie does is send both of the lovers to our world, 1936 in France. Ilian doesn't know that Olia is also in the world. Olia knows where Ilian is but cannot show herself to him or she will die.

For years Ilian isn't even sure where he is from and slowly his memory is crumbling until he finds a volume of fairy tales in his adopted family's house. From that point forward, including service during WWII, Ilian spends trying to gather evidence of his other existence so that he get back to where he belongs, to find his love again.

During this time, Ilian, known as Joshua Pearl, runs into a teen boy who sees his suitcases full of the items of evidence. The boy doesn't know what he is looking at until years later when he starts piecing together the whole story. Can he help chronicle the love story and in the process help the lovers return home before it is too late?

The Book of Pearl was written by de Fombelle, a French author and playwright. It was translated into English by Sarah Ardizzone and Sam Gordon. The author has created a fairy story worthy of the standard set forward by the Grimm Brothers or Hans Christian Anderson. Like most fairy stories there was a very dark undercurrent in the tale. It is really three stories: 1. The story of Ilian's birth and eventual love affair with Olia; 2. Ilian as Joshua Pearl in our world; and 3. The teenager, now grown man, who figures out what is going on and offers to help. Because of the three stories and the shifting point-of-view, the story takes quite a bit of concentration to untangle. But IF the reader is willing to do this, the effort is well worth it.

Recommended for older teens who like fantasy and fairy tales and are willing to deal with lots of threads of the story.