Review: The Apocalypse of Elena Mendoza 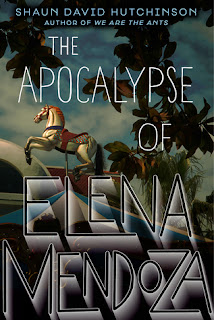 Elena Mendoza is unusually unique. She was born to a virgin mother by an unusual process called parthenogenesis. This makes her essentially a clone of her half Cuban/half American mother. Kids at school tease her about it calling her Mary, as if she is the virgin herself. She also hears voices, or more correctly she hears toys and signs talk to her, like a My Little Pony, the Lego Gandalf, and a Barbie doll. In fact, the Siren on the Starbucks poster told her to heal her classmate who was just shot in front of one of the coffee shops. When she did heal the girl, she discovered another unique thing about herself---she could heal people. All the inanimate objects who talk to Elena tell her that it is her responsibility to save the world by healing people. One thing the little creatures don't tell Elena though, is that every time she heals someone several other people will disappear from earth, including the boy who shot her classmate. As time goes by more and more people are "raptured" with every healing. This is obviously a problem and a cause for alarm. Elena doesn't know what to do. Her best friend, Fadil, witnessed the first healing and he believes that Elena's ability to heal is from God. He is a devout Muslim. Elena is not so sure. But something is certainly different.

As Elena ponders what she should do, people come to her for healings, some with good motives and others with bad motives. She is now ridiculed at school for this, too. The gal she originally healed and Elena find themselves bound together through the experience and even begin a friendship and possible relationship. Still the objects scream at Elean to get going, to save the world before it is too late. Argh! What to do?

I liked The Apocalypse of Elena Mendoz. All of the characters were flawed and quirky but relatable at the same time. Hutchinson is able to draw characters who come from different lifestyles, religions, sexual orientations without over emphasizing any point. Elena is bi-sexual. So what? Fadil is Muslim. Good for him. I like that. I kind of hate it when I read a YA book and the author is trying so hard to be inclusive that it feels that way. Hutchinson's characters are who they are just like in real life. Some readers might be critical of the fact that we know nothing about the others who keep telling Elena to heal. I personally liked this aspect of the book. We know she was born from a virgin birth.The religious symbolism abounds. Elena is forced to accept things on faith alone.

I read Shaun David Hutchinson's first book, We Are the Ants, a few years ago and really enjoyed it. In that book the main character believes he is abducted by aliens and told that he has the power to save the world by pushing this red button. He can't decide if the world is worth saving. Now in The Apocalypse of Elena Mendoz we revisit a similar theme---one person being offered the ability to save the world by some other-worldly beings. I beginning to see a pattern here. For this reason I don't think that the Printz committee will seriously consider the book for an award this year, it being similar to an earlier book by the author.

I think that readers will find a lot to like and relate to in The Apocalypse of Elena Mendoz, especially the conflict that Elena finds herself in. Should she heal people when it causes others to disappear? I kept asking myself that question. What would I do? Read it and let me know what you think.

I read a print version of the book which I borrowed from the public library. It has 438 pages, so it qualifies as a book for the BIG BOOK Summer Challenge hosted by Sue @ Book by Book.

Posted by Anne@HeadFullofBooks at 12:52 PM