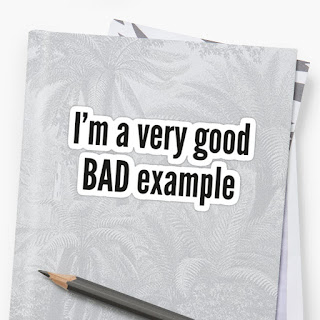 I've been in two books clubs, one for over 20 years, the other for around fifteen years. With so many club meetings under my belt you can imagine that I have experienced quite a few "clinkers" along the way. In this blog post I am highlighting several  recent book club selections that just didn't work. But before I do that, let me talk a bit about what makes a good book club selection.

Pierce County Library system (my library) is a wonderful resource for book clubs. Check out the link here. Here is what they say about what makes a book a good one for club discussions:


People often ask what qualities make a book a good candidate for book discussion. Probably the most important criteria are that the book be well written, have an interesting plot and three-dimensional characters. Good book-discussion books present the author's view of an important truth and sometimes send a message to the reader. A good book-discussion book often stays in the reader's mind long after the book is finished and the discussion is over. These books can be read more than once, and each time the reader learns something new.  During a book discussion, what you're really talking about is everything that the author hasn't said--all those white spaces on the printed page. For this reason, books that are plot driven (most mysteries, westerns, romances, and science fiction/fantasy) don't lend themselves to book discussions. In genre novels and some mainstream fiction, the author spells out everything for the reader, so that there is little to say except, "Gee, I never knew that" or "Isn't that interesting." Librarians, booksellers, and friends can often supply you with suggestions of good books to discuss.

"You're really talking about everything that the author hasn't said---all those white space on the printed page." Ah. That is it. Good books for club discussions give us something to talk about because everything isn't said already so we get to fill in the blanks. That gives us something to discuss. 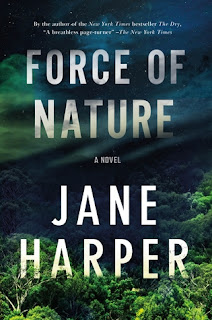 We all love a good mystery but by-in-large they make terrible club choices. By the end of the book the mystery is resolved so there is nothing to talk about. We forgot that when we selected next month's book, A Force of Nature by Jane Harper. This mystery is set in Australia. A group of employees are sent to the outback for a bonding weekend. The women are teamed up against the men and each group has to accomplish a set of tasks before they return on Sunday. The men return on time, the women don't. When they finally stagger into base camp, there are only four women with them. One has gone missing. What has happened to her. Is she out in the bush somewhere wounded and needs help? Is she dead? Is she alive, coming out of the bush somewhere else? No one knows, or does someone know?

On its face, the mystery is a solid one. We get a lot of back story of the women, their relationships with one another and how they feel about themselves. We meet the detectives, who also have their own back stories, which relate to this case. Solid stuff. Just not good for discussion, I expect. The detectives figure out what happened and everyone is changed by the experience. Period.

One other note about this book, which no one noticed when we selected it. The book is part of a series. It is the second book in the Aaron Falk series. I am going to go out on a limb here and suggest that books in a series, especially subsequent books, are also not good book club choice. Two strikes against A Force of Nature.

Every one wants to read books they like, but we need to be reminded that there "is a difference between a good read and a good book for a discussion" (PCL). Some of the most popular, well-liked books make for terrible discussions. Case in point was The Hundred-Year-Old Man Who Climbed Out the Window and Disappeared by Jonas Jonasson. The book is hilarious. HILARIOUS, actually bordering on silly. It is a fast read, too. Everyone liked it but what could you say, except "what did you think when this or that happened?" Everyone would chuckle and we'd move on to the next question which was met with a similar chuckle. 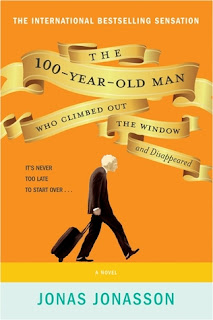 In the Hundred-Year-Old Man Who Climbed Out the Window and Disappeared readers meet Allan Karlsson who is turning 100. His care facility is hosting a party for him. The mayor is coming to it. But Allan is not pleased. He wants the independence he is used to. He wants to drink vodka when he wants. So he crawls out the window and jumps on a bus, destination unknown. He is still wearing his bedroom slippers. Along the way he meets up with several criminals, somehow ends up with a suitcase full of cash, and murder happens. As all these preposterous things occur we also learn about his early life when he helped develop the atom bomb, made friends with American Presidents, Russian tyrants, and an important person from China. He actually participated in several critical events of the twentieth century.

Every one loved the book but our discussion was a disaster. Read the book on your time. Choose something else for your club meeting. 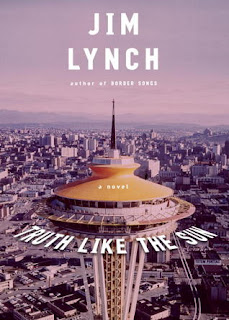 "Probably the most important criteria are that the book be well written, have an interesting plot and three-dimensional characters" (PCL). It is hard to judge this by a cover. Hence, we often select books which have rather flat character development or ones which aren't particularly well written. It happens. But with a little research ahead of time, it shouldn't happen that often. And as folks in the club read more and more well-written books they will become pickier and picker and demand it. I think that is what happened with our last month selection. The book, Truth Like the Sun by Jim Lynch, should have been one we all enjoyed because it was set in Seattle and the story centered around the Seattle World's Fair in 1962. It is a local story for us. Many of the gals in the club remember going to the fair and what Seattle was like in the 1960s. Some even remembered the political climate at the time and the shady dealings that went along with it. But none of the mattered because the book just wasn't that well written. No one could quite put their finger on it. Something was off. I thought it was because the readers were not allowed to get too close to the characters, as if they were being held at arms length from us. Others thought it was because the story jumped back and forth from 1962 to 2001. If was confusing to figure out what was happening when.

In the book, Roger Morgan is the mastermind of the fair. (He is a completely fictitious character but probably based on a amalgam of several actual people.) In a lot of ways if not for his efforts the fair would have been a flop. But he makes it work on the strength of his determination and will. But he also seems to be involved in some gambling and some shady deals involving the police, once again based on but not actual events. Fast forward almost forty years and Roger Morgan is running for Seattle mayor because he doesn't like the direction the city is going and he is sure he can get things back on track. Along comes a new investigative reporter working for the Post-Intelligencer. She is sure she can dig up some dirt on Roger. She does, but at what cost?

All-in-all the book isn't bad. It just lacked something that made it special. All was not lost, however, as the book was set aside and we just had a fun discussion about the World's Fair, called Century Twenty One. Several of our older members had some very memorable stories of their own to share. That discussion led to discussions about another book highlighting a world's fair, The Devil in the White City, about the Chicago World's Fair and an activity that one of the gals participated in related to that book. See, we can digress and still have fun.

Narrative nonfiction works well for discussion books but beware of straight nonfiction. The Devil in the White City, is an example of an excellent discussion nonfiction book because it written in a style that makes it almost seem like fiction. The facts are told in a story-like fashion. By in large we have figured this out and don't select books which are just a bunch of facts, so I can't even think of a good bad example. Often some of our best discussions are over narrative nonfiction books because the readers actually learn something and a world of knowledge opens itself up.

Good luck with your book club selections. If you have some more good examples of bad book club books, please list them in the comments below. Thanks.

Posted by Anne@HeadFullofBooks at 3:39 PM