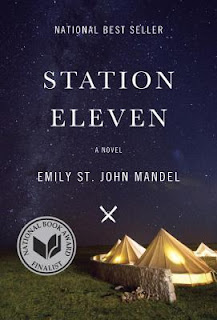 In Emily St. John Mandel's masterful novel, Station Eleven, a virulent strain of the flu wipes out over 99% of the world's population. But unlike similar books on this trope, Station Eleven does not focus on the immediacy of the apocalypse that follows in the immediate aftermath of the disease. It skips back and forth between pre-flu days and 20-years post-apocalypse, when most survivors have joined into small groups or towns. As the plot advances connections between the two time periods are made especially among a few of the characters. All of these characters, whether they lived or died, have one person in common---Arthur Leander. He is an actor who dies on stage from a heart attack during his performance of King Lear. One character, Kristen, is a child actor on stage with him the night he dies; another, Jeevan, performs CPR in an effort to save his life; another, Miranda was his x-wife and the creator of the comic book "Station Eleven" which plays a prominent role in the story; and the last is his child with an other wife. Though Arthur dies early in the book, his story is at the center of all the stories which evolve from that evening.

Kristen joins the Traveling Symphony several years after the apocalypse. The troop travels from town to town performing Shakespeare plays for small audiences. They settled on Shakespeare because people wanted to be reminded of what was best about society before the epidemic. Though the lifestyle was rough living on the road and scrounging for food and resources all the members of the troop felt compelled to stick with it because "survival in insufficient." Art and music are just as  important as other necessities of life, so they traveled on. One day they made their way into a village which was governed by "the prophet" and things didn't go well for the troop who decided to leave town as quickly as possible. They decide on a course which will take them to an airport where they have learned there are about 200 survivors living and one of them has started a museum of past useful items.

Because the author has skipped the intervening twenty years between the epidemic and where the characters are now, the reader is not subjected to the horrors of survival that certainly happened. Instead one comes to understand that the story is less about the apocalypse and more about loss, memory, nostalgia, and connections to other people. The story is full of hope and art and reaching beyond mere survival.

I listened to the audiobook of Station Eleven for the first time in 2015, reading it for one of my two book clubs. That club always starts with members going around the circle explaining if they like the book or not. I recall not being very pleased with the book at that point. It seemed to me that some obvious points were missed and other inaccuracies dogged and clouded my thinking. But after the discussion on the book, I changed my mind. Others in the group were able to explain away my misgivings and talked about what they liked.

After that club meeting Station Eleven has become one of those books I can't seem to shake. I think about it ALL the time.  My mind races to thoughts like "what if this or that happened, like in Station Eleven?" So when my second book club selected it for the June book this year, I decided to reread it. Three years is a long time to remember details important to group discussions. Once again I chose the audiobook format. But the reading experience was totally different than the first time. For one thing I became very aware of the author's brilliance in pulling threads of connection all the way through the book. A seemingly small comment or event early in the book would come back in a meaningful way later. Often that thread related to Arthur Leander. This time I knew to pay attention.

However, some things still bugged me about the details. Like why did the troop sleep outside in tents instead of bunking in one of what would have been millions of empty, abandoned houses? Gasoline no longer worked but why didn't the members ride bikes or horses? Admittedly these are not important to the story line so I will drop them and accept the the book as it is.

At my second book club the opening question was two fold: What would you miss the most if this happened to the world and what frivolous thing would have trouble giving up. Most people identified electricity or transportation for their first answer and then some funny things like pedicures and tater tots made it onto the second list. As I think about it now, with more time to reflect, I think I might miss knowing what was going on in the world the most. I would know that there were others surviving as I was, but I wouldn't have any idea what they were doing and inventing. Can you imagine how frustrating that would be?

In the book Kristen is interviewed by a reporter who is attempting to get some news of the world. She says that the new reality is hardest for those who remember the way things were before. "The more you remember,the more you have lost." Think about that the next time an oldster opines about the good ol' days!

Posted by Anne@HeadFullofBooks at 12:16 PM