A few weeks ago a friend with a son who is an advanced middle grader reader asked for my book recommendations. I spent the majority of my professional life teaching and then in the library at the high school level but decided I was up for the challenge. Here are my recommendations for middle grade series: 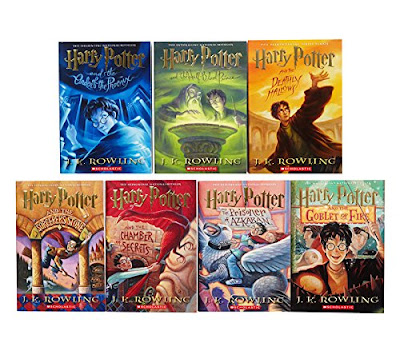 1. The Harry Potter series by J.K. Rowling. I suppose this goes without saying but I was always surprised when high school students told me they hadn't read the series. The movies are good, but the books are better. Seven book series. Average lexile level, 950.

2. Percy Jackson and the Olympians by Rick Riordan. These books are really written for middle grade students but high school students, both boys and girls love them, too.  Riordan has six series. His books will ignite a curiosity about Greek and Roman mythology so you might want to find a guide that talks about Greek Gods and their relationships to one another. Once your child is done with this series he will have a lot of other series to move to directly. For a list of all his series click link: Goodreads. Five book series. Average lexile 710.

3. Gregor the Overlander (The Underland series) by Susan Collins. You've heard of The Hunger Games series (which are excellent) but before Collins wrote that blockbuster series she already had another winning series published. Gregor enters another world by crawling through a vent behind his washing machine. Very creative. Five book series. Average lexile- 700. 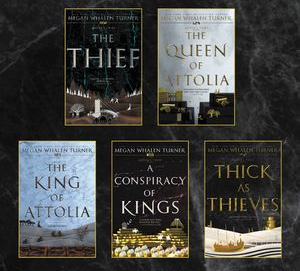 4. The Queen's Thief by Megan Whelan Turner. I've only read the last book in this five book series, Thick as Thieves,  which can stand on its own but it was excellent and so well-written. In fact, the first book in the series, The Thief, won a Newbery Honor. The series is about an incorrigible and charismatic thief, Eugenides, who finds himself in the service of the queen. Lexile 880. 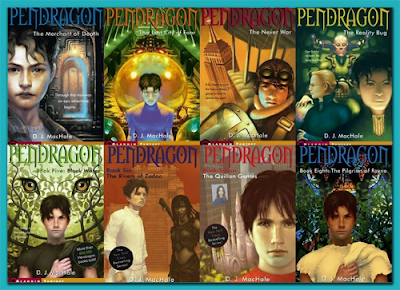 5. Pendragon by D.J. MacHale. This series was wildly popular my first few years as librarian. The protagonist, Bobby Pendragon, is fourteen when the series starts and he is out to save the world. Ten book series. Average lexile 660. 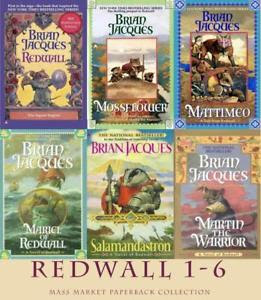 6. Redwall series by Brain Jacques. Younger advanced readers often are not mature enough to handle high school themes that match their reading levels and may still like themes directed at younger readers where the heroes are animals. This LONG series, 22 books, will appeal to those readers. The legend begins with a mouse who is a monk who attempts to recover the special sword. My nephews, now grown, loved the series, but I am not sure if they will read all 22 books! Lexile 800.

7. Eragon (The Inheritance Cycle). Several boys at my high school would read through this series once a year. Once a year! Most of them started reading it in junior high. The series begins with a boy, Eragon, finding a dragon egg. In a world where dragons are no longer allowed this was a very dangerous and risky thing. Once the land was ruled by dragons and their riders and the two have a very special relationship. This series is all about their attempt to regain the former glory. This fantasy series is not for the casual reader. Each book in this four-book series is long, over 500 pages and the lexile average is 1000.

8. Fairyland by Catherynne M. Valente. This series wasn't particularly popular in my library but I think it is charming and so-o-o creative. Twelve year old September is living an ordinary life in Omaha until one day she is met by the Green Wind and told she is needed to save Fairyland. I thoroughly enjoyed the first book in the series, The Girl Who Circumnavigated Fairyland in a Ship of Her Own Making (and don't you just love the title?) Five books in the series. Lexile 920.

9. The Giver Quartet series by Lois Lowry. Most school children are required to read the Dystopian novel, The Giver, but few know that there are three other books in the series. The series involves four protagonists set in the same futuristic world as in the Giver. (Lexile 760.) 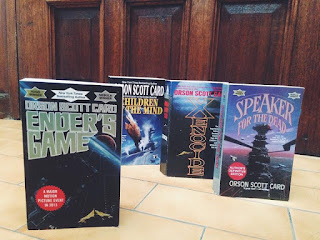 10. Ender's Saga by Orson Scott Card. The first book, Ender's Game, in this series is so good. It is perfect boy-book. It is so exciting. A young boy, Ender, is identified as a good candidate to save the world through a video game type scenerio. The book can easily be read as a stand-alone but many kids want to read on in the series which includes four-seven book, depending on how you count. (Lexile 800.) 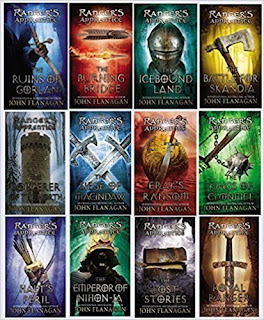 11. The Ranger's Appentice by John Flanagan. This was by far the most popular series in my high school library with boys. After finishing one book they would wait impatiently for the next book in the series, which was undoubtedly checked out by another fan. I am not sure about the appropriateness of this series for younger readers, though the note on Amazon.com says it is for readers, age 10 and up. Will is selected as an apprentice to the Rangers who have earned the fear of the people but who actually are the protectors of society. Twelve books in the series. Lexile 800. 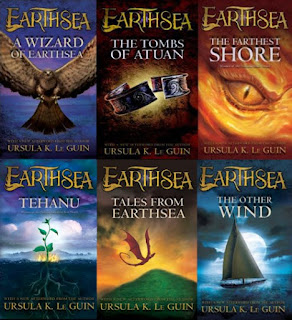 12. The Earthsea Cycle by Ursula LeGuin. I just finished the first book in this series by a celebrated fantasy author. This series was her first series for children, after a career of writing for adults and it shows. The plot is intricate and the characters are fully flushed out. The writing is spot-on. The series starts by introducing the readers to Ged, the greatest wizard of all time, but here we know him as Sparrowhawk. Six books in series. 850 lexile. 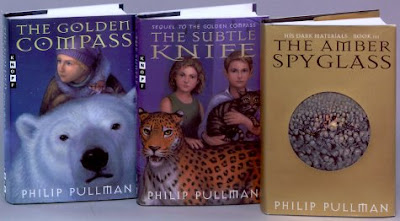 13. His Dark Materials Trilogy by Philip Pullman. Some wonderful books are nearly wrecked by the movies that are made from them. This may the case with The Golden Compass, the first book in the trilogy. Avoid the movie, starring Nicole Kidman, and jump into the books instead. Set in Oxford, Lyra is a precocious child and roams the campus with her daemon, or her special soul animal, when she learns that her mother is doing dangerous experiments. My family consumed this whole series on audiobooks and loved the format. Try listening to it while on a car trip or as a read aloud! Lexile 950.

14. The Tiffany Aching Series by Terry Pratchett.  Pratchett wrote an elaborate, multi-book series called Discworld. It had many offshoots and several mini-series within the grand series. The Tiffany Aching series is one of the mini-series and the only one written for young adults. It is delightful, funny, and full of Pratchett wisdom. I listened to the series on audiobook so was double delighted by the British accented reader. The last book of the series, The Shepherd's Crown, was the last book published by Pratchett before he died of Alzheimer's Disease. I cried at the end, knowing that a beloved author and series had come to an end. Even if you don't think this series is what your child would like, you should consider reading some Pratchett for yourself. His books are in a league of their own. Five book series. Average lexile around 800.

If nonfiction is your child's thing, give these series a try:
A. Spy of History by Workman publishing. So far I have found three titles: Anna Strong and the Revolutionary War Culper Spy Ring; Victor Dowd and the World War II Ghost Army; Mary Bowser and the Civil War Spy Ring.

B. Assassination series (my name for these books) by James Swanson, published by Scholastic Press:
"The President Has Been Shot!": The Assassination of President Kennedy; Chasing Lincoln's Killer; Chasing King's Killer: The Hunt for Martin Luther King, Junior's Killer. The author appears to write about famous assassinations for adults and then publishes a version of the same book for younger readers. I have read two of the three and found them fascinating and illuminating. Lexile 1000.

Readers of all ages want to read what other people are reading, what is currently popular. The books I've listed, with the exception of the nonfiction titles, all have been around for a while. They aren't the latest and greatest titles, they are the tried-and-true books which have stood the test of time. But because these books aren't currently on the "most popular" list, you may have to ask a librarian to assist you and your child in locating copies of all the books in the series. They may even have to request copies for you from other libraries. Do your homework on where to find the books and be patient.

Since I haven't worked with middle grade students for such a long time, I'd be delighted to hear from other librarians and readers who can recommend other book series that would be of interest to advanced middle grade readers, especially boys! Please leave your comments below. Thank you.

Posted by Anne@HeadFullofBooks at 5:20 PM