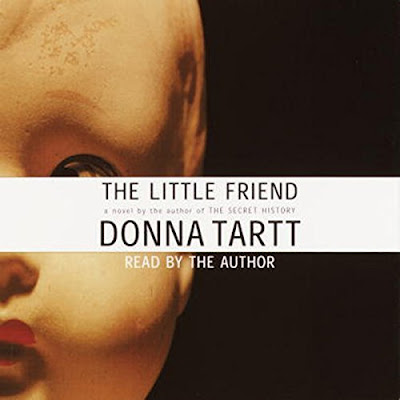 Last week, on a trip to move our daughter to California for her first job in her chosen profession, my husband and I listened to three audiobooks: The Little Friend by Tartt; The Virgin Suicides by Eugenides; and Hillbilly Elegy by Vance. Today I decided to write up a review of The Little Friend, thinking I could knock it off quickly because it was the shortest of the three audiobooks. I started, as I often do, reading professional reviews of the book which help me crystallize my thoughts. I was especially interested in finding the answer to the question of who was the little friend referenced in the title since I didn't recall any mention of it while we listened to the book. I quickly figured out why...the short, little audiobook we listened to which contained only 6 1/2 hours worth of material was clearly an abridged version of the book. It is actually a very long book, at 624 pages long, if it were available in audio format it would clearly 25+ hours worth of material. We only got less than one fourth of the book, just the highlights really. No wonder I didn't know the answer to my question, undoubtedly that part of the story was lobbed off in the abridgment.

Calm down, Anne. Clearly this is your own fault. When you picked the CD set from the library and noted that it only had 6 CDs you should have been suspicious. And, obviously, it must have said it was abridged somewhere on the case, though as the photo shows it is not mentioned on the front side. And, I'd like to remind you, that both you and Don enjoyed the listening experience. So why not tell your readers what you did like about the abridged version you listened to? Some time in the future, if you are still feeling ripped off, you can locate the print edition of the book and you can read the whole thing without skipping a word. There. Feeling better? Now you can proceed with the review, be it what it is a review of an abridgment.

Here is the summary of the book, supplied by the publisher:


In a small Mississippi town, Harriet Cleve Dusfresnes grows up in the shadow of her brother, who - when she was only a baby - was found hanging dead from a black-tupelo tree in their yard. His killer was never identified, nor has his family recovered from the tragedy.

For Harriet, who has grown up largely unsupervised, in a world of her own imagination, her brother is a link to a glorious past she has only heard about in stories. Fiercely determined, precocious far beyond her 12 years, and steeped in the adventurous literature of Stevenson, Kipling, and Conan Doyle, she resolves, one summer, to solve the murder and exact her revenge. Harriet's sole ally in this quest, her friend Hely, is devoted to her, but what they soon encounter has nothing to do with child's play: it is dark, adult, and all too menacing.

Harriet is determined to find out who murdered her brother and sets about solving it with only the smallest of leads and with a misguided single-mindedness. Her lead, spoken aloud by the older brother of her friend Hely, implicates a n'er-do-well, Danny Ratliff. He is the youngest brother of a clan of petty criminals. He and his older brother make illegal methamphetamine and use part of their product. The middle brother, who found Jesus while in prison, runs a shabby mission and hosts a visiting snake handler and his snakes on occasion. Against these criminals Harriet and Hely plan on extracting revenge.

In the abridged version we listened to, The Little Friend, is very much a mystery and almost an adventure story. Harriet and Hely attempt to hurt Daniel Ratliff which obviously isn't a fair fight, kids verses adults. But tell the kids that...let me just say, it gets pretty exciting!

In the reviews I've read of the full print version of The Little Friend, I learned that the story isn't mostly a murder mystery. It is described as a Southern Gothic tale and a coming-of-age novel. Along that line a lot of time is spent comparing the two families, the Cleves and the Radliffs. The Cleves are from old money and the Radliffs are what some would call white-trash. The Cleves used to live in a magnificent mansion. The Radliffs live in a trailer. Harriet and her sister are essentially raised by their grandmother, Edie. The Radliff brothers are raised by their grandmother, Gum. Apparently, as the story unfolds the southern racism also played into the themes. We heard just a little bit about that in the audiobook, but not enough to report it as a theme. Obviously, we experienced a different aspect of the book than was intended in its original form.

Donna Tartt, the author, was also the narrator of the audiobook. Obviously she knew that her book was highly abridged, which made it into a whole new book. I wonder what led to the decision to abridge the book so much and what she thought of the product? I will never know, but I should say this---as a murder mystery, The Little Friend is a very good book, very exciting, and hang-onto-your-seat scary. Tartt, a southerner herself, does a wonderful job with the setting and the characters. Her writing reminds me of the short stories I read by Flannery O'Connor. If you've not read any of her work, I challenge you to read one of her stories and not think about it for months afterwards. I don't think it is possible. Listening to Tartt read is another rare treat. I've heard her read another audiobook, True Grit, which I felt was done just perfectly.

By the way, I still don't know where the title of the book, The Little Friend, came from. Does anyone know? Also, I just looked it up and full audiobook is available. If you have a lot of time and want to tackle it (25+ hours), would you let me know what you think of it? Thanks!

Posted by Anne@HeadFullofBooks at 6:43 PM