Review: Picture Us In the Light by Kelly Loy Gilbert 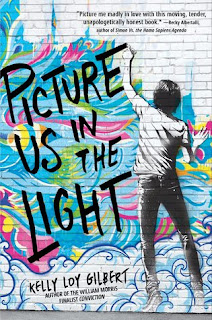 When a YA book gets starred reviews from five professional publications it is time to take note. That is exactly what happened with the new YA novel, Picture Us In the Light by Kelly Loy Gilbert. Reviewers have been crazy about the book for good reason. Here is what they are saying about it:


It’s easy to pigeonhole books: this one’s an immigrant story, this will appeal to readers who have lost someone to suicide, here’s a doomed love story, and so on. Gilbert includes all these elements and more in this novel, masterfully negotiating plot twists and revelations while keeping the focus on her characters. -Publisher's Weekly

With grace and respect, Gilbert manages to address the existential quandaries of both second-generation American teens and their immigrant parents who must make profoundly life-changing choices to give their children the best life possible. The result is both exhilarating and tortuous—Gilbert methodically lays bare her characters’ secrets as if she was slowly pulling a cloth off a fine painting. -Booklist

The author demonstrates exquisite facility with tech-savvy teen-speak in every scenario and balances the authentic dialogue with elegant prose. -School Library Journal

When Danny Cheng's father, a first generation immigrant from China, loses his job working as a lab assistant at a nearby college, everything in Danny's life starts to unravel. Though he is clearly one of the least wealthy students at the high school in Cupertino, California, Danny's life had been looking up. He had just learned that he had won a full scholarship to attend the arts school of his choice once he graduates. Then his dad loses his job and suddenly everything he thinks he knows about his parents, he realizes he doesn't know. In fact, it is really obvious that there are some very big secrets they are keeping from him. Also he is sad about events that have tainted his life since the previous year, which Danny feels are likely his fault. He is also worried about the relationship between his best friends.

The book opens with an early memory for Danny. He and his mother accompany his father to his lab on a weekend day. The father demonstrated the experiment he was working on concerning quantum entanglements.  "In quantum physics, entangled particles remain connected so that actions performed on one affect the other, even when separated by great distances. The phenomenon so riled Albert Einstein he called it 'spooky action at a distance.'" Danny's father was doing experiments on humans and found that they could also be considered in quantum entanglements. Even when he and his mother were separated by a whole classroom, if one looked a picture of their loved, their heart rate and blood pressure would change in response to the photo. But here is the weird part, their loved one down the hall, who didn't see a photo, would have the exact change in body processes at the same time. This concept of quantum entanglements became the metaphor for the whole rest of the book. Danny couldn't untangle himself from his parents and what they were feeling. We was all tangled up with what was happening with his friends. Even a long dead sister was another entanglement.

“Because if you're tangled up in someone else, if your futures are tied that way, if that's real and if you know when it happens - then it means you know who you belong to, and you know whose fates are tied to yours, whether you like it or planned it or not, whether they still exist in the same world with you or they don't, and I think that's where everything begins and ends. I think that's everything.”


I always like it when authors find a way to connect with me, the reader. Years ago I saw a musical/drama event about quantum entanglements but they were calling "withings". In it we saw the entanglements between people and how they helped in healing and connections. It is as if we cannot untangle ourselves from our loved ones. We are "with" them wherever we are. The threads that hold Danny are both tight and loose at the same time yet, he senses, also fragile. He wants his parents to tell him about their secret, but he doesn't really want to know because it will upset the equilibrium. As first generation immigrants, he worries that they may be sent back to China. He also worries how his actions affect his friends yet he can't seem to stop himself from doing things which may sabotage their relationship.


“Other people don't exist just to be your happy ending, you know?”

I had a hard time gaining traction on this book. I know it had more to do with me than with the book because I was so busy in my personal life and this is not a book which allows itself to unfold slowly, at only a few pages per night. I needed to devote a good chunk of time to reading to gain purchase, and when I finally did just that, the story unfolded before me and I saw the brilliance that the professional reviewers found. The story is also very timely. Just because the immigrants were from Central America doesn't mean that their situation wasn't anymore perilous. Though the book only implied it, we certainly need to look at the laws we set about immigration, and what to do when the rules are broken. Is it always the right response to take a hard line?

There is a lot in this book and a lot to like.