Review: THE PICTURE OF DORIAN GRAY 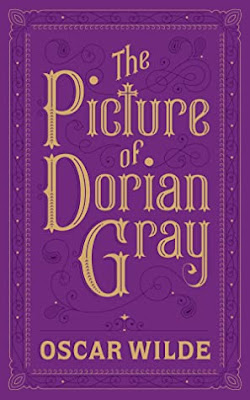 Without realizing it I decided to read The Picture of Dorian Gray during October which has been turned into Victober, a month set aside to reading Victorian authors. I wouldn't say that I enjoyed my reading of this late 1800s classic by the Victorian author Oscar Wilde. In fact, at one point I would have said I hated the book, though I didn't end on that note. Why? Well, I didn't like any of the characters. Not one. I detested the lifestyle that was accentuated. The hedonism of not only Dorian Gray but others of his class was deplorable. And lastly, I admit to being bored reading long stretches about that lifestyle. Not a winning combination.

And yet -- and this often happens when I read classics -- there is much to learn from the story. Italo Calvino defined "a classic as a book that never exhausted all it has to say to its readers." So what is it in Dorian Gray that still speaks to us today, over 120 years after it was first published?

The Picture of Dorian Gray is first and foremost a story about striving for eternal youth. Shmoop describes it as the "holy Grail of anti-aging" books. This is certainly a theme that has interested mankind since the beginning of time and clearly is one we are obsessed with today. Why just today I clicked past a show on a TV where a beautiful woman was talking about some process one must use to avoid getting wrinkles. Today's youth, forced to read The Picture of Dorian Gray for a class assignment, would clearly recognize the desire for eternal youth to be a main theme of the book as they see it in their culture everyday.

Secondly, Dorian's story plays on the theme of selling one's soul to the devil in order to gain a desired outcome. One knows intrinsically that Faustian bargain never ends up well. Dorian looks young but his portrait ages. He involves himself in all kinds of hedonistic activities, including murder, yet his soul only seems to change on the picture, not on his face. What a magical portrait, one that must be played with to view the results, no doubt.

What I didn't know until I investigated a bit deeper into the themes of the book was Wilde was playing around with a modern (to him) trend that was in vogue during the time period. The hedonistic lifestyle, called the 'Decadent movement', was a late 19th century artistic movement known for prizing beauty and the aesthetic experience over everything else. The yellow book, given to Dorian by Henry, is likely a thinly veiled reference to a popular book of the decadent movement: Against Nature by Huysmans. The protagonist in that book seeks aesthetic pleasures in an almost robotic way. Dorian Gray as a character is consumed with the pursuit of pleasure to the point that nothing is pleasurable any longer. People living during that time period would have recognized the decadent movement as played out by most of the book's characters.

Apparently this didn't keep people from criticizing his work, however. The cacophony of noise around the bad morals of the book became so loud that Wilde wrote an epigraph for the second edition, which really reads like a preface. In it he accuses his readers with "the unpardonable crime of trying to confuse the artist with his subject matter." He, Wilde, was making art. They, the reader, turned it into something scandalous.

Reading classic books rarely brings me the pleasure I expect until I do a bit of research afterwards and discover all the themes and symbols I missed along the way. Then I am tremendously glad that I finally got around to reading the dang book. That would the case with The Picture of Dorian Gray. I like it much better now that I've done a bit of research about it. Ha!

The version of the book I read was the e-book format of the classic illustrated book. I was terribly disappointed by it since it had only three of four illustrations. I'm like a kid. I want to look at pictures, and not just three or four of them!

To make sure I give credit where credit is due, I gained a lot of the knowledge I shared on this post from this site:

Posted by Anne@HeadFullofBooks at 2:22 PM