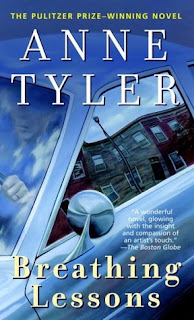 Maggie and Ira Moran had to go to a funeral in Deer Lick, Pennsylvania. Maggie's girlhood friend had lost her husband. Deer Lick lay on a narrow country road some ninety miles north of Baltimore, and the funeral was scheduled for ten-thirty Saturday morning; so Ira figured they should start around eight. This made him grumpy.

She drew her tail of hair over one shoulder and examined it. The skin beneath her eyes was shiny. In fact, she was crying, but she didn't seem to realize that. "So I drank a whole bottle of wine," she said, "and then I phoned everyone I ever used to know, all the friends we had when Max and I were courting. You, and Sissy Parton, and the Barley twins --"

Summary: Maggie and Ira are going to a funeral for the husband of Maggie's best friend, Serena. Though they give themselves plenty of time to get there the trip is fraught from the beginning with car troubles, no map, squabbles, grudges, and miscommunication. When they finally do get to the church where the funeral is being held they discover that Serena has invited all the old gang and expects everyone who sang in her wedding would sing the same song again, no matter how inappropriate it seemed now. Later, on their trip home after getting kicked out of the reception, Maggie talks Ira into driving out of their way to stop and see their granddaughter and ex-daughter-in-law, Fiona.

Through the course of the several hours in the car together both Ira and Maggie think back over their past so the readers learns about their love story, their children's lives, and the mess they have made of their marriage. And now Maggie, who is always trying to fix everything and everyone, is going to try and fix her son Jesse's relationship with his ex. The thing is, no one else is interested in this fix except Maggie and Maggie just can't seem to leave well enough alone.

Review: Several years ago I embarked on a personal reading challenge -- to read past Pulitzer Prize winners. I looked over the list and decided reading all the past winners was too daunting of a task so I picked through and decided to read 'some' of them. I made a list of the ones I had heard of or that sounded good. Breathing Lessons by Anne Tyler, winner of the prize in 1989, went onto my list because of some nebulous reason that involved another book by Tyler which I hadn't read but I liked the movie. The Accidental Tourist.

I have to admit the question of why this book won the Pulitzer crossed my mind more than once as I was making my way through it. For one thing, I didn't like any of the characters. None of them. Maggie was a flibbertigibbet, completely unaware of what a goof ball she was and how her actions affected others. Ira seemed stuck. As a fifty-year old he realized that his life has been completely without consequence. His favorite past-time was playing solitaire. He seemed more level-headed than his wife but kept getting drug into her schemes, which proved he was not. None of the other characters: Serena (girlfriend with dead husband), Daisy (daughter), Jesse (son), Fiona (ex-daughter-in-law), and Leroy (granddaughter) showed much gumption or depth either.

As I was looking around the Internet trying to find something that explained it's selection I ran into this article,"Breathing Lessons by Anne Tyler (1989): Stop Me if You Think You’ve Heard This One Before, but nothing says the 80s like Journey, Anne Tyler, and bad marriages." The unnamed author of this article ran a blog titled Pulitzer Schmulitzer until 2017 where he ranked the Pulitzer winners. Breathing Lessons was #58 on his list. (Now I have to go and check how many winners there are in total... Hmm his list isn't helpful for that answer.) The title itself says a lot. Maybe the committee selected the book because Anne Tyler herself represented the 80s and they didn't want to miss a chance at recognizing the decade through one of its best and prolific writers. He (I know the author of the article is male because of the photo) goes on to say this about why he thinks it won the big prize of 1989.

I liked Breathing Lessons. I just didn’t love it. It’s hard not to like Anne Tyler... she ruled the 80s, with three novels in a row nominated for the Pulitzer Prize: Dinner at the Homesick Restaurant (1983) and The Accidental Tourist (1985) in addition to Breathing Lessons. And if you’ve read any other Anne Tyler books, I can safely say that Breathing Lessons is a super Anne Tyler-ly Anne Tyler book, but not the best one. If I’d never read any of her other works, I might have rated this one higher. But alas, it wasn’t my first and for me, this book had that “been there done that” feel to it. Giving her the Pulitzer for Breathing Lessons was, to me, a little like giving Martin Scorsese the Best Director nod for The Departed after not giving it to him for Raging Bull or Goodfellas. Stop me if you think you’ve heard this one before, but although I love Anne Tyler’s works, I love this one only slightly less than her others. (Pulitzer Schmulitzer)

Like the unnamed author of the above article, I liked, not loved Breathing Lessons. One thing I haven't mentioned yet, but it factors quite heavily, the book was quite humorous. In these COVID-y days of uncertainty and serious threats, it was fun to read a book that was, well, not so serious. I gave the book four stars but of the all the Pulitzer Prize winners I've read, 40, I'd have to rank this one in the bottom third.  So I admit, this is not a very favorable report.