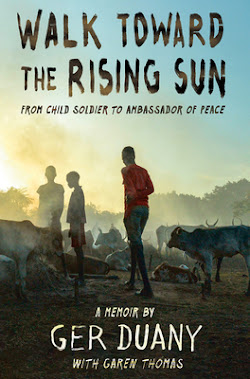 Ger Duany is one of 20,000 children who left Sudan during its decades long civil war. These children are commonly called the 'Lost Boys of Sudan.' Walk Toward the Rising Sun: From Child Soldier to Ambassador for Peace is his story.

Ger Duany was born in village named Akobo in what is now South Sudan. His goals in life were modest: to be a good son and brother, maybe get an education, and when he was grown to become a soldier like this father. He wanted to make his parents proud of him. But then his village was attacked by the Sudanese Army and as a young teen he found himself a soldier himself, carrying a gun, and fighting with anyone at the drop of a hat. At fourteen he escaped to Ethiopia and lived in a refugee camp for a while. There for the first time in his life he went to school and found that he really enjoyed the intellectual stimulation. He didn't want to return home because of the lack of schools there but he did eventually go back to Sudan. In his young life he had encountered so much death and destruction when he was offered the chance to go to America via Kenya, he jumped at the chance.

Once in America life didn't seem to unfold as he planned either. First off he was embarrassed to be the oldest student in his high school with the lowest level of education. He also found other Sudanese boys to hang out with and would often get into fights. He didn't know how to be a good student with so little practice at it. After moving around a bit he finally ended up living with his relatives in Indiana, finished high school, and got a college scholarship to play basketball. Though he was very tall he wasn't very solid and injuries became a problem for him causing him to lose his scholarships. Around the same time he was approached to audition for a movie that Reese Witherspoon was making that was set in Africa. He got the part. Later while living in New York he found himself working as a male model.

On the outside life seemed good. But on the inside Ger Duany was plagued by nightmares and desperately wanted to know about his family left behind in Sudan. When he did get back to Sudan and was able to see both of his parents the path forward began to, emerge for him. He realized that his childhood traumas didn't need to dominate his life as an adult. Once freed from these demons he could finally move forward with purpose and hopefully could be an inspiration for others. He is still acting and modeling but now he is also a United Nations High Commissioner for Refugees and a Peace Ambassador.

At the end of the book he is reminded of the time, as a teen, when he and his family had to flee without a map just heading in the direction of the rising sun. He says:

"I pray these stories about my journey will engage, entertain, and galvanize you. May all your journeys continue toward the rising sun."

Source: Print book from the library and Audible purchase for the audiobook.

Posted by Anne@HeadFullofBooks at 2:06 PM