Review and quotes: APPLE (SKIN TO THE CORE) 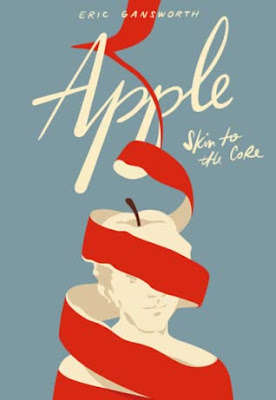 Title: Apple (Skin to the Core) by Eric Gansworth

Book Beginnings quote: from the first poem, "Uncle Tomahawk Hangs Around the Fort Until He Finds His Own Metaphor."

Socials and Powwows bring us together, because
they celebrate all the ways we maintain our own
ways of life. We know the dances and the songs,
the exact rhythm patterns for drums and rattles.
But we've borrowed dances from other nations. We have
no alligators in the Northeast, no real-world example to borrow
in creating these moves, and yet, Alligator Dance has
been with us for so long, it feels like ours, free and clear.

Friday56 quote: from the poem, "Jaboozie Gives Me Two Lessons in Tradition."

We are at that in-between place, no longer
kids, not quite teenagers. We've been playing
all day at her house halfway down Dog Street
from mine. She's been teaching me how to match
colors and tie knots to catch the hollow glass
globes used in beadwork. In the middle of her
rhythmic, perfectly gradient green beaded turtle
shell, she places one ridiculous bright yellow
bead, off-center in one plate...
...She says in every piece of art you make
if you are Haudenosaunee, you include one flaw,
intentionally, so you acknowledge that only
the Creator can make something perfect.

Summary: Apple (Skin to the Core) is a memoir written in verse by artist and poet Eric Gansworth. He is a member of the Ononadaga Indian tribe living among the Tuscaroras, living on the Rez (reservation) yet an outsider on the inside. This is the story of his family, starting with the horrible boarding schools three of his four grandparents were sent to as children to "kill the Indian but save the man." Gansworth was the youngest of many children, born into a family of poverty and an absent father. The memoir is divided into sections as Eric tells us his story and the story of his family from his childhood on the Rez to his current life as an artist living off the reservation.

Review: Apple (Skin to the Core) was a 2021 Printz Honor book, an award that goes to the top YA books published in the US. The award is based on merit not necessarily on teen appeal. Though I was tremendously moved by many of the poems, others left me flat or I didn't understand at all. The books is long, 339 pages, and many of the poems are long, too. For this reason I have a hard time imagining that many teens will clamor to check this one out. However if they do, there is still a lot to like.

For one thing, reading the book helped me understand the experience of being an 'outsider' in a culture. "When we are born outsiders, we sometimes / find bridges we can make with our own stories / embracing the ways they are connected, instead / of pointing out the gaps between two sides"(284). And calling an Indian 'Apple' is to accuse him of being red on the outside but white on the inside. It is hard to be an outsider who is always accused of doing or being something wrong.

The poem that spoke to me, actually cut me to the quick, is titled "Lines Spoken to Me Through High School and, Let's Face It. Beyond." Each line starts with "You're (or your, or you've)..." with some compliment like "You're pretty smart... / You're pretty articulate..." followed by "you know, for an Indian" (171). Have I said or thought something like this? Oh gawd, I hope not. My heart breaks to think of rude things people say so thoughtlessly.

Gansworth must be approximately my age. He had a brother who served in the military in Vietnam, like many of my friends' siblings and he was (is) a big Beatles fan, like me. In fact, one whole section of poems In Apple (Skin to the Core) are titled for all the songs in my favorite Beatles album, Abbey Road. In the notes at the end of the book, he talks about that album and how it served as an inspiration for this memoir. "Abbey Road was the Beatles' last attempt to exist in that one identity before transforming into something else...I'm well versed in the act of taking last fragments of one's identity before leaving it for another, losing the old one forever" (334).

This book may not become everyone's favorite but I suggest that you give it go and see which of Gansworth's poems speak to you or deliver the message you need to hear today.