As a secondary school librarian I used the term 'nonfiction' a lot. Heck, over half my library was full of nonfiction titles. But if my job were an elementary school librarian I would have to learn to call them 'information books.' Today I will be reviewing two information books designed for elementary grade children and these two reviews will fill out my review of the 21 Cybils finalist books I read as a judge for the award. By now I hope you have read the other nineteen reviews and are aware of how excellent all the finalist selections were this year. 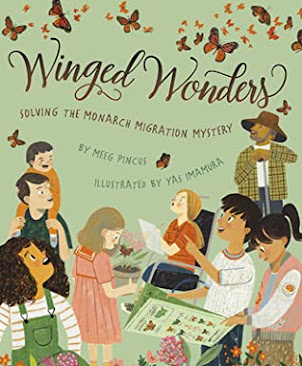 This delightful children's information book has a lot going for it. First the subject--butterflies. Secondly, the unraveling of a mystery that stumped scientists for many, many years. And thirdly, the knowledge that school children helped solve the mystery---Where do all the monarchs go when they migrate? In 1976 the world learned the answer. They migrate to the Oyamel fir tree groves of Central Mexico which is almost two miles above sea level. But who should get credit for this discovery?
Author Meeg Pincus and illustrator Yas Imamura show the readers how it was a team of people who, when all their parts were put together, solved the mystery. It was the college teacher who spent all summer chasing monarchs in his car trying to determine where they were going. It was the school children in Minnesota who painstakingly attached tiny papers onto the wings so if anyone found it they'd know how far the monarch flew on its journey. It was the hippie and his girlfriend who marched around the forests of Mexico until they found the spot where millions and millions of monarchs covered every  branch. It was the Mexican people who showed the hippies where to go.
If I were a elementary teacher teaching a science until, I would use this book for sure. It has darling illustrations and clearly shows the students the scientific steps taken to solve this wonderful mystery.
Source: e-book provided by the publisher.
The Fighting Infantryman: The Story of Albert D.J. Cashier, Transgender Civil War Soldier by Rob Sanders, illustrated by Nabi Ali 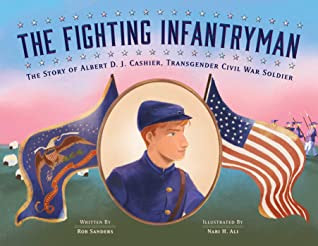 Albert Cashier was a born a girl in Ireland in the 1800s but wearing boys clothes was much more convenient when herding sheep. Later when Albert and his stepfather stowed away on a ship coming to American it seemed safer to dress as a boy during the journey and by the time they arrived in New York the old name was discarded and Albert was his name. For many years Albert worked at jobs only men would be hired for. Though short he grew up to be strong. When the Civil War was beginning Albert volunteered to serve but he had to pass the physical first. When the doctor only looked at his hands and feet, Albert passed and served honorably in the Union Army for four years. His secret was still intact. After the war he returned to Illinois and lived a quiet life surviving off his small war pension and the odd jobs he could pick up. One day when he was in his 60s Albert was in a car accident. The doctors and nurses agreed to keep his secret once they discovered his gender. Somehow it got out anyway and many people didn't believe that he was the 'man' who served in the Civil War so they wanted to take away his small pension. But members of his army company stood up for him and said that yes, this was the Albert they knew. Because of this accident and the news that accompanied his story, we now know about Albert Cashier, a transgender Civil War hero.
There is really no discussion of Albert's sexuality, just about his gender. I read this book to my three-year-old grandson in front of his parents. Afterwards I looked up and said, "I hope you are okay with this." Ian's Dad said, "He is already familiar with this topic because of Mulan." Just more information for a little kid to confirm that people are people and it is okay to be who we are!
The book has plenty of back matter which includes a photograph of Albert Cashier. I think this book is completely appropriate for elementary children.
Source: Print edition from the publisher.

Posted by Anne@HeadFullofBooks at 10:34 AM