It is only the first part of March and already I am four books behind on my want-to-review book list. My tardiness is to your benefit...four reviews in one post. 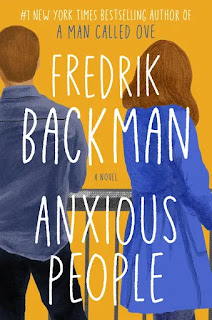 It is New Year's Eve day in a Swedish town (not Stockholm) when an overwrought young parent on the verge of divorce and losing child custody, attempts to rob a bank to pay for rent. As luck would have it, the bank is cashless. In an attempt to get away from the police the would-be bank robber runs into a nearby building and unintentionally turns an ordinary real estate open house into a hostage situation.

The eight diverse strangers attending the open house all are very peculiar and anxious people, hence the book title. Sobbing and still wearing a face mask, the bank-robber apologizes, "I'm having quite a complicated day here!" So it everyone else, including the two police officers who are trying to remedy the hostage situation without calling in the Stockholmers. Since neither officer, a father-son duo, have handled a hostage situation before they have to Google what to do.

In the beginning none of the characters are likeable or relatable but as the story unfolds we get to know what makes each person anxious that changes and there a satisfying yet unexpected ending. As the headline of the book review in USA Today says, "kindness and compassion win the day."

I, unfortunately, had to read this book in two parts separated by two months in between. (Darn libraries don't let readers have the books they check out endlessly!) For this reason, the book seemed choppy (Duh!) but once I was able to get settled in the second time to finish it, I was charmed. Quirky doesn't even begin to explain the characters and plot of this book. If you are a fan of A Man Called Ove or Beartown by the same author, I'm sure you will appreciate Anxious People, too. 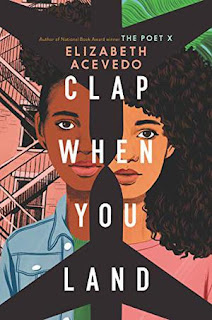 Clap When You Land by Elizabeth Acevedo

In 2001, not long after 9/11, an airplane headed toward Dominican Republic crashed in Queens and killed all 260 people on board. The crash devastated the Dominican community in New York since hardly any family was left unscathed. Author Elizabeth Acevedo took a kernel of the tragedy of that true plane wreck and its aftermath and reworked it into Clap With You Land when another plane crashes and kills everyone on board including a man returning to D.R. from New York. Waiting for his arrival is his daughter, Camino. What this girl doesn't know is that her father has another daughter, Yahaira, and a different wife left behind in New York. Two different families in two separate countries affected by one man's death.

Last year it seemed like everyone was talking about this YA novel by the award-winning Dominican-American author Acevedo. Her first novel, Poet X, won all kinds of awards the year it was published and like that novel this one is written in verse. In alternating chapters we meet the two sisters who eventually make contact months after the death of their father. Acevedo handles their different perspectives in culture, setting, and upbringing with ease. Each girl has a unique voice in her chapters, too. Camino's verses are more flowing and straightforward, almost like reading prose. Yahaira's chapters are more energetic, the poetry coming at the reader in a more staccato style. Since I listened to the audiobook I was made aware of it by the reader's reading style than the actual words on the page.

The title of the book  is revealed to the readers in one of Yahaira's chapters. When she travels to D.R. to meet her sister, all the people on board the flight clap when they land in D.R., a traditional welcome home gesture. I recommend this book to anyone who is looking for a multicultural YA novel or someone who enjoys reading poetry. I am a huge fan of Acevedo and will probably read everything she writes. The reviewer for Kirkus Reviews says this book deserves a standing ovation. I agree. 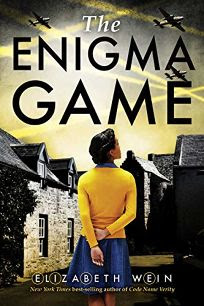 The Enigma Game by Elizabeth Wein

Back in 2012 I read the first book in Wein's excellent series of WWII tales involving one or more members of the Beaufort-Stuart family, Code Name Verity. The Enigma Game is the fourth book in this series (but it would be the second book chronologically after The Pearl Thief) but it certainly also works as a stand-alone title.

The story is set in a Scottish countryside near a air force base in 1940. A fifteen-year-old orphan, Louisa, is charged with escorting an elderly German opera singer from London to live with a niece who owns a hotel and bar not far from the base. There Louisa meets several people working out of the air force base: Jamie Beaufort-Stuart is a pilot commanding a squadron and Ellen McEwan who is from a Traveller family and is volunteering as a military driver. (Both of these characters were introduced in The Pearl Thief.) One day a German pilot lands on the airfield flying a white flag. Under guard he is billeted at the hotel until someone from intelligence can make their way to the air field to interview him. Until that person arrives the air force uses the aunt to interpret his German. It is clear he is trying to communicate with some particular person who goes by a code name. When no one arrives from London, the man loses his nerve and flies off. But before he leaves he hides an enigma machine and the code to decipher it. Louisa finds the machine and figures out how to interpret the code. She and others communicate what they learn to Jamie Beaufort-Stuart to help thwart German plans of attack.

Wein seems to have a skill for weaving historical information into spine-thrilling plots and creating fully dimensional, interesting characters. She also clearly knows what she is talking about when it comes to flying those old fighter planes from WWII and she puts that knowledge to good use in The Enigma Game. I am a huge Elizabeth Wein fan and enjoy this series and this book immensely. 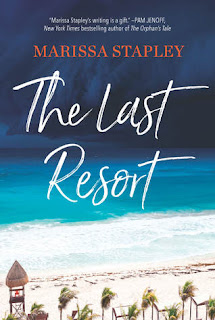 The Last Resort by Melissa Stapley

The Harmony Resort offers hope for struggling marriages. It is run by a celebrity couple, Miles and Grace Markell and they offer a "last resort" or chance at saving the marriages in a beautiful Mexican setting. Couples who attend the conference may have marriages that look perfect and they certainly have plenty of money but inwardly things are crumbling. Miles and Grace offer them hope for a marriage recovery. The only problem is that Miles and Grace also have a crumbling marriage and the facade they are putting up has started to crumble. When a tropical storm traps the hosts and their guests on the resort secrets are revealed, alliances are tested, and no one remains the same in the end.

The Last Resort is the March selection for one of my book clubs. It came in a book club kit from the public library. Books in these kits are generally good discussion books and have some literary merit. This book misses the mark on both of these scores, I'm afraid. I didn't like it at all. In fact, the only reason I am reviewing it is because I promised myself that I would review all book club selections I read this year.

Miles is a monster and has followers almost like he is a cult-leader. Maybe we can talk about what we know about cults and cult leaders. Grace is a battered wife. We could certainly talk about the topic of spousal abuse. Marriages fail for a variety of reasons, I guess that could be another topic of discussion. What I hope we don't try to talk about is plot (unrelatable), the characters (single dimensional), or the setting (can't picture it.) As you can tell I am no fan of this book and I don't recommend it.