Quotes and review: A Heart in a Body in the World 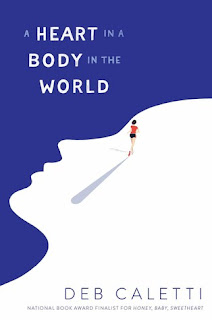 Title: A Heart in the Body in the World by Deb Caletti


"Annabelle Agnelli is trying to hold it together in the parking lot of Dick's Drive-In. After what just happened, she's stunned. Frozen."


“It's hard to be all that you can be on carrot sticks and criticism.”

Summary: Annabelle is experiencing PTSD from a traumatic experience that involved her and a boy. Everyone in the whole school knows what happened and she feels responsible for all the pain and unhappiness. When a man leers at her in the Dick's Drive-in parking lot she spooks and starts running. She runs from Seattle to Renton, a city over 15 miles away, before she stops. At that point she realized that while she is running she can keep her demons at bay and decides, with no preparation, to run all the way to Washington, DC. She tells her family and friends she has to do something, to make a difference. After her grandfather is tapped to go with her on the trip in his motor-home, Annabelle starts running a half-marathon a day. She learns quickly that she can't outrun her problems, but she does meet people along the way who are as angry as she about what happened and she starts to accept the love and support people are willing to give her.

Review: This book unfolds like a tightly folded piece of paper. Details arrive slowly and messily and one is not quite sure what happened or why for the longest time. But as the reader flattens out the paper they learn more about Annabelle and her relationship with "the taker", a boy she refuses to name. We also learn about how hard it is to be female in a male dominated world, one where women are supposed to be thin, but strong (hence, the Friday 56 quote), look good but not slutty, have desires but aren't supposed to show them. Guns and the ease with which a person can purchase them also factor into the story. It is a very timely book in terms of what is happening in our nation and world.

A Heart in a Body in the World was a Printz Honor book last year, an award that goes to the best of the best in YA lit. I wondered at this as I started reading the book thinking, "oh no, not another book about a teenager running (literally) away from her problems." But as the story unfolded I realized how important and timely this book is and the message, though it comes out slowly, is delivered perfectly. By the time that Annabelle gets almost all the way across the country on her run, she is asked to deliver a message to a group of assembled college students on her purpose for the trip. The speech she gives is the most real and raw I've ever read in YA lit. It alone makes reading the book worth it. As I was perusing Goodreads' reviews on this book I couldn't believe the superlatives that many readers used:


"I can truly say, with every single ounce of my heart, that this is one of the best books I’ve ever read in my entire life. It’s so quiet, but so loud. It’s so heartbreaking, but so healing. It’s so impactful, it’s so powerful, and it’s completely and utterly unforgettable." -Melanie

"I'm furious. I'm heartbroken. But more than anything else, I'm so grateful that this book exists." -Romie

"This is one of the strongest YA contemporaries I've read in a LONG time. Caletti's writing is lovely and accessible, but it never feels dumbed down. I think she's particularly strong at using language to convey how trauma affects Annabelle's mental health/mental state. It examines how women and girls are so often are reduced to objects to be controlled by another. I was incredibly impressed with how Caletti dives into the nuances of this. When girls are ceaselessly conditioned to derive value in relation to the male gaze, what happens when that becomes internalized?"-Emily

If my words didn't convince you, I'm sure that these other reviewer's words did: Read this book!

Posted by Anne@HeadFullofBooks at 10:26 AM