Review: The Friend by Sigrid Nunez 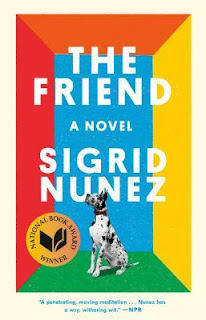 Yesterday I finished my personal National Book Award challenge by completing The Friend by Sigrid Nunez. It was a book I knew little about but wanted to read because, I know this sounds shallow, it had a picture of a Great Dane on the cover and I'm a sucker for stories about dogs. So imagine my shock when I discover that "the friend" is a person who just committed suicide, not a huge, dopey dog. (Well, that is not exactly correct, but I will explain later.)

I felt duped by the suicide. I had just finished a National Book Award finalist, The Great Believers, which is about the AIDS epidemic which started in the early 1980s and killed thousands, millions of people and now here was a person who selfishly took his own life. Ugh. I kept wishing that the selection committee had swapped the awards so that the book about the greater tragedy were the winner, not the other way around.

In The Friend no one is named, except the dog and the apartment supervisor. Even the narrator has no name. The book is written from one friend to another, one alive, one dead. Both friends were writers and both were teachers. Their relationship had endured the dead man's three marriages and many, many affairs. It was as if the friendship had survived not so much because of love but because they were both in the same profession(s) and from the same generation. They understood each other. The book is an homage, of sorts, to their friendship where the narrator refers to her dead friend as "you" throughout.  She (we at least know that the narrator is female) doesn't canonize her friend, however, and we learn all kinds of horrible things that her friend did when he was living, like bedding so many of his students, and refusing to stop calling them "dear" even when it became un-p.c. to do so.

A month or more after the funeral, the man's third wife contacts the narrator explaining that her husband had left instructions that the dog, Apollo, should go to his friend (the narrator.) How could this be? He had never said anything to her about the dog and she lived in a 500 square foot apartment which had covenants against dogs. Nonetheless, Apollo comes to live with her and soon a new friendship develops, this one between woman and the dog. Apollo is also grieving the loss of his master, so the two find solace in the companionship with each other.

But love, we know, always carries with it the chance of loss. Great Danes do not have long lives and soon the writer finds herself worrying about a new loss, an impending loss as the dog becomes infirmed with pain from arthritis. It is here where Nunez really shines in her writing. She gives her reader a chance to slow down, to watch the evolution of love and companionship even with the threat of loss on the horizon. We smell the roses, we see the sparkle of light on the water, and feel the warmth of sun of the dog's fur. We understand the tragedy of loss comes only because we loved in the first place. In the end we comprehend that "the friend" really is the dog, too.

At first I was pretty critical of the book, at least in my mind, and I wondered if it won the National Book Award because the subject, or one of them anyway, is about writing. Bookish people reward books about writing like the Academy Awards go to films about Hollywood. But as I settled in for the short haul (the book is quite short at 213 pages), I came to recognize the book's brilliance. Written in what seems to be a diary format, or short letters, the narrator takes us on unexpected diversions and areas of interest. One time, quite confusingly, we are even treated to an imaginary situation where the writer considers a conversation with her friend if he hadn't died.

Did I like the book? Yes. Will I recommend the book to others? Only if they are very big dog lovers or literary types. Will I reread the book. Unlikely. Once through was enough, I think. Should you read this book? Read a few other reviews before you decide. I recommend the one published in the LA Times. I found it to be very helpful.