Sunday Salon: A reaction to the past week, with notes of hope

Weather: sprinkling right now. It rained for a while last night and continues to do so very lightly.

My reaction to the events of this past week: I, like almost everyone I know, spent Thursday in front of the TV watching the Judiciary Committee to hear testimony from Dr. Christine Blasey Ford and Supreme Court  nominee Brett Kavanaugh. My heart broke for the woman who had her life altered so dramatically altered one day many summers ago by two drunken boys, one who sexually assaulted her. Dr. Ford was very credible and clearly had very clear memories of the event seared into her brain. As I listened to her testimony and observed how she responded to the senators' (and their surrogate's) questions, I was certain she was speaking the truth. I wondered how the senators could vote to put a man on the Supreme Court who had done such a thing, even though it happened years ago? Then Brett Kavanaugh gave his testimony and the differences couldn't have been starker. He came out angry and deviant. He didn't answer questions. He repeated the mantra, "I didn't do it and I wanted a hearing to clear my name." Yet denied the need for an FBI investigation. He seemed angry and defensive. He even espoused conspiracy theories. At this point the senate committee seemed to fall apart and we witnessed real ugliness and partisanship. I knew Dr. Ford would not be given a fair vote. I went to bed that night with a sick feeling in the pit of my stomach. The whole process appeared to be a sham.
Then on Friday, after two brave women confronted Senator Jeff Flake and he turned around and said he would not vote to move Kavanaugh's nomination out of committee unless there was an FBI investigation of the claims, there seemed to be a chance that truth would win out. We'll see if that happens. I am cautious but hopeful.

As a Christian I am disgusted by this:


So what other notes of hope did I experience this week?
1. I am not in church today because this weekend is our Faith in Action week-end where everyone goes out and does a service project instead of going to church. Don is doing yard work right now for an aging couple who can no longer prune their hedges. I spent part of yesterday at a local clothing bank putting away summer clothing and putting out winter wear. Two of the other volunteers explained how powerful the ministry to clothe people has been in our community. It was time well spent, an experience that made me feel hopeful for the goodness of mankind.

2. This rally for Beto O'Rourke this weekend in Texas drew 60,000 people to hear Willie Nelson sing and to support the candidate. Nelson rolled out a new song called "Vote 'Em Out". I agree. If we want change, we have to vote. 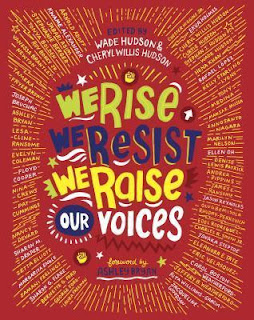 3. This book: We Rise, We Resist, We Raise Our Voices edited by Wade Hudson and Cheryl Hudson.
The book is dedicated to "those who advocate for and pursue a just society and basic human rights for all people. " Fifty-three YA/Junior authors and artists contributed to this project with the goal of communicating to the younger generation how to stand strong in the face of racism and acts of inhumanity and how to thrive anyway. Many other authors wrote poems, but others wrote letters or small essays. The book was illustrated by a variety of artists creating a delightfully pleasing and colorful book. In the forward, Ashley Bryan says. "If you flip through all the creative gems put unto your hands and hearts by the gifts of people of color, we will hear your voices chanting praises. Then you will realize this is not a onetime read but a resource from any pitfalls of the day...Reading opens treasures, and this book is a treasure to enjoy." It was the perfect thing to read after a contentious week

4. This boy...how can I not be hopeful when I get to spend time each week with this little guy. Here he is enjoying nobs. 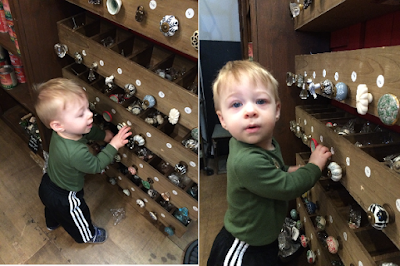 5. This dog...things are going a bit better on potty training but accidents still happen. What joy exudes from this little guy. 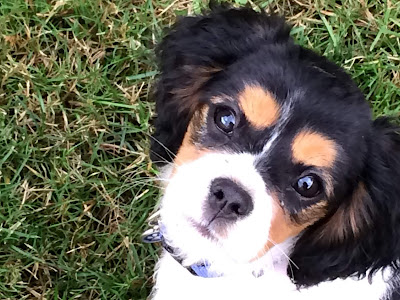 6. Women's Bible Study has recommenced. We are studying the book series by Beth Moore, Living Beyond Yourself: Exploring the Fruit of the Spirit.

7. The weather has turned and fall is here. This photo was taken two weeks ago when the Purple Mountain Ash tree in our backyard was just "thinking" about shedding its leaves. 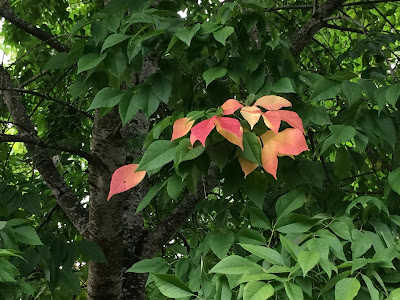 8. And this funny. RBG:"Hey Brett, You think your confirmation hearing is unfair? For my confirmation they threw me in a river to see if I float."


I am still full of hope. 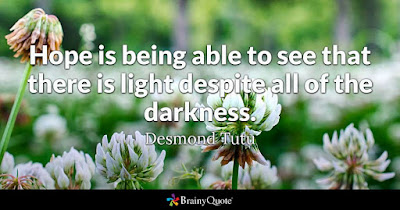 Posted by Anne@HeadFullofBooks at 10:27 AM