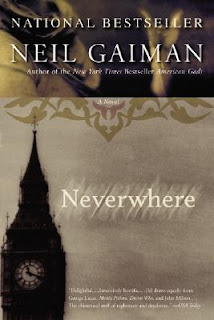 Underneath London, there is another city. A city that no one could even imagine. A city where all the people who fall through the cracks end up. The place is full of murderers, monsters, angels, and, of course, rats. Richard Mayhew discovers this other London accidentally. One day he is a businessman heading to dinner with his beautiful fiance, but when he stops to render help to a homeless girl the city as he knows disappears and he has no place else to go. He is an inadvertent visitor to the underworld but while he is there he discovers aspects of his personality that he didn't know existed. These are attributes he comes to appreciate in himself.

Neverwhere was Neil Gaiman's first published novel. It was published in 1996 and was a novelization of a TV show by the same name, where Gaiman was one of the writers. The TV series didn't become popular out of U.K. but the novel has been very popular and helped launch the writing career of a beloved author of many children's, teens, and adult books.

All of the Gaiman books I have read are multi-genre tales combining fantasy, horror, magical realism, and sometimes, a bit of humor. Needless to say this is not our typical book club fare. In fact, when handing out the books from our library kit to club members last week, a thought went through my head wondering how many of the gals will actually read it. In a funny exchange with one club member, she told me that she likes reading about science. She told me she had heard the book was a science-fiction novel. O boy, we are in trouble if she expects to learn any science lessons from Neverwhere.

This was on my mind as I started my research on the book for this review. When I ended up on Gaiman's website I was pleased to see that he actually has discussion questions for the book. So we aren't the first book club to tackle Neverwhere. Phew. I was worried we would just flounder around for an hour and then eat dessert. Ha! In fact now that I look at the questions I see there is a lot of stuff that my group, made up mainly of middle-aged, church ladies, can relate to. The concept of people falling through the cracks is one our church is very familiar with. We serve homeless people through several ministries---serving meals; opening our church on freezing nights for homeless folks to sleep; assisting a clothing/housewares bank for low-income people. Neverwhere satirizes our world. It should be fun to identify those aspects in our discussion. I am starting to feel much more comfortable with this book choice for our club.

By the way, since this is supposed to be a book review, here is a blurb found on Gaiman's website about the book. If this doesn't make you want to read the book, I don't know what will.


If Tim Burton reimagined The Phantom of the Opera, if Jack Finney let his dark side take over, if you rolled the best work of Clive Barker, Peter Straub and Caleb Carr into one, you still would have something that fell far short of Neil Gaiman's Neverwhere. It is a masterful debut novel of darkly hypnotic power, and one of the most absorbing reads to come along in years. (Gaiman)

One more thing. I don't normally read horror because it makes me feel afraid. But I can read Gaiman's horror. His monsters are scary but not terrifying. His characters always show growth as they face their monsters, which is the point, isn't it? We all have monsters we have to face in our lives. How we cope, the growth we attain, want we do after facing our "monsters" makes us into the people we become. That is what good literature is about and this book is good literature! If you haven't read Neverwhere, I recommend it. If you have, what did you think of it?

Posted by Anne@HeadFullofBooks at 9:27 PM