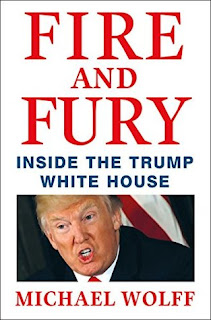 Everyone is talking about it, Fire and Fury: Inside the Trump White House, so why shouldn't I join the conversation? After purchasing the e-book version, because no print versions were currently available, I immediately set to reading.

Since I started reading Fire and Fury I have seen the author, Michael Wolff, several times on TV shows: news, commentary, and comedy. He must be the hottest guy to get on shows today. The book is currently the #1 selling nonfiction book in the world. Wolff gained nearly complete access to the White House after Trump saw Wolff on TV giving an interview about how the media should tone down their attacks on Trump. During a phone conversation, Wolff pitched the idea of writing a book about the first 100 days of Trump's presidency -- an insider's look at the day-to-day workings of Trump and his team. With unprecedented access Wolff started frequently hanging out at the White House, scheduling meetings with staff, and being present while waiting for meetings. He conducted over 200 interviews between May 2016 and October 2017. Some of the material he uses are direct quotes from named staff  members. Other unnamed sources are quoted, though he might identify a source as staff, friend, or surrogate. Lastly he makes personal observations based on times he was in the room when a conversation or confrontation took place. One quoted phone conversation appears to be Trump speaking directly to Wolff.

After the publication of this book, the White House went into full denial mode with President Trump and staffers saying the book was all lies and that no one had given Wolff permission for such unprecedented access to the daily workings of the President and the White House. "Don't buy the book!" "It is all fake." "He's a liar, I never said that." In fact, Trump's lawyer sent a 'cease and desist' letter to the publisher that generally said 'don't publish or we will see you in court.' John Sargent, CEO of Macmillan/Henry Holt [publisher], wrote a gem of a letter to his employees about the situation. Read it here. In Sargent's letter, he cites First Amendment protections and important court decisions. He concludes the letter with the paragraph below, which gives me hope for the future:


There is no ambiguity here. This is an underlying principle of our democracy. We cannot stand silent. We will not allow any president to achieve by intimidation what our Constitution precludes him or her from achieving in court. We need to respond strongly for Michael Wolff and his book, but also for all authors and all their books, now and in the future. And as citizens we must demand that President Trump understand and abide by the First Amendment of our Constitution.

Though I had heard about many of the situations described in the book, it provided a source where all these snippets of information are put together and shed a light on the inner workings to illuminate my understanding. I also learned new, very disturbing things about our 45th president.

To begin with Trump didn't even want to president. He just wanted to be famous, the most famous man in the world. His friend Sam Nunberg asked him why he wanted to be president and Trump never answered. "The point was, there didn't need to be an answer because he wasn't going to be president" (4%).  (Sorry. My Kindle Fire isn't showing page numbers, so all citations for quotes will give the percentage of the e-book that quote came from.) Another friend, Roger Ailes, had suggested if Trump wanted a career in television, first run for president. Trump began floating a rumor about a Trump network. Running for president was a means to that end. Many of the issues that surfaced during the campaign would have sunk any other candidate, didn't matter to them because, "He wasn't going to win! Or losing was winning" (5%)

Several months before the 2016 election I had the thought that Trump's campaign was just like the musical "The Producers", where two men attempt to make money by creating a flop of a play. Only problem is, the play becomes popular, so their plan doesn't work. Apparently Michael Wolff had the same thought and made that comparison in the first chapter about Trump's unlikely election. He would win if he lost.

Almost every page of the book highlights this very disturbing detail:  Trump appears to know nothing about nearly every subject and doesn't show any aptitude or interest in learning more. "Whatever he knew he seemed to have learned an hour before -- and that was mostly half-baked" (7%). He doesn't or can't read (35%). If even the shortest of documents are placed before him, he will only read them if he sees his name scattered throughout the text. His brain seemed incapable of performing what would be essential tasks of his new job:  planning, organizing, paying attention, switching focus, reining in his behavior, even linking cause and effect (8%). By now, even if you are only paying attention to the news intermittently, none of this is news to you.

During the campaign Trump promised to surround himself with the "best" people. The opposite seems to be true. Steven Bannon who prides himself on helping to create conflict (20%); Sean Spicer, "whose job was to explain what people did and why, often simply could not -- because nobody really had a job, because nobody could do a job" (20%); Steve Miller was brought on to write speeches but he seems incapable of writing anything more than bulleted lists; Kelly Ann Conway, Steve Bannon, and Ivanka Trump didn't have any assigned jobs. Son-in-law Jared Kushner has been assigned to all manner of special projects like bringing peace to the Middle East and curing the opiate addiction crisis. Chaos reigned in the White House with Trump at the center of it all "like a Delphic oracle, sitting in place and throwing out pronouncements, which had to be interpreted. Or as an energetic child, and whomever could placate or distract him became his favorite (22%).

Lately much has been made of Trump's mental health. An eye-opening comment in the book has me very worried that indeed he is unstable. "He has had a longtime fear of being poisoned, one of the reasons he liked to eat at McDonalds -- nobody knew he was coming and the food was safely premade" (26%). And he expressly forbids anyone to touch his toothbrush. He won't even let his housekeeper strip his bed. These are not the thoughts and actions of a sane person.

The title of the book is from a Trump tweet: North Korea, if threats continue, "will be met with  fire and fury the likes the world as never seen." He is not only stupid, he is extremely dangerous. Is he talking about nuclear war? This terrifies me.

About the Russian debacle...well, I trust you will want to read the book to find out what Wolff was able to ascertain. It is so maddening and frustrating, yet revealing and enlightening, too.

I will end with a quote, the funniest one in the book. As you know, Trump is constantly announcing that every piece of bad news about him is 'fake news.' Then during a late night telephone call made during the first week in the White House, Trump said this:


They take everything I've ever said and exaggerate it. It's all exaggerated. My exaggerations are exaggerated (30%).

It may not be your favorite book. But I recommend you read it, anyway. It is very edifying.