First review of 2018: My Brilliant Career 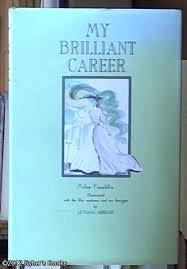 In the midst of all the fuss during the holiday season, judging nonfiction books for the Cybils Award, and going on vacation to NYC, I have also been reading My Brilliant Career by Miles Franklin as the Classics Club Spin book challenge.

My Brilliant Career was published in 1901. It was written by Miles Franklin when she was just sixteen-years-old. Considered to be semi-autobiographical about a young girl growing up in the Outback of Australia. And not just your run-of-the-mill girl who is interested in boys, dances, clothes, and marriage, but a girl who dreams of life beyond the mundane, a life she dreamed as her brilliant career. In a NY Times review of the book, Phyllis Rose said the book should be called an "adolescent fantasy." Indeed at times I found myself wanting to knock Sybylla's head because she was behaving so immaturely, then I would have to remind myself that she was only sixteen...not just as a character but as an author. Of course, it was an adolescent fantasy. What teenager doesn't fantasize about what they hope their life will be like? Sybylla thinks of herself as ugly and not worthy of being loved. Yet, she pines for something more than the mundane life she lives.

Phyllis Rose goes on to explain that the publication of My Brilliant Career, which Franklin thought would launch her writing career, ended up being the bane of her existence.


To her horror, people assumed that the novel was totally autobiographical, in detail as well as outline - that the louts of Possum Gully were the louts of her home region, that her father was a drunken incompetent, that the swinish M'Swats and the romantic Harold Beecham really existed. She had expected literary success to bring her love and applause; instead, in her neighborhood and within her beloved family, she inspired only outrage...she felt (she said) like a woman who had had a baby out of wedlock; her joy in the baby was undercut by her sense of disgrace. She wanted to forget My Brilliant Career, to blot it out. Later, she would refer to it contemptuously as a girl's book, tossed off in a matter of weeks (10), written out of 'inexperience and consuming longing.' (Rose, NYT)

For 65 years the book was out-of-print at Franklin's insistence. It was not published again until 15 years after her death. When it was republished it was picked up as some sort of feminist manifesto... a young woman who wants to make her way without a man.

I disliked and liked the book in equal measure. I liked the picture of turn-of-the-century Australia that it painted. Tea parties, horse races, bone-breaking work, hot and dusty wagon rides, and wonderful romps around the piano all seem so foreign today. I disliked the stilted language Franklin used to express Sybylla's thoughts and conversations. I also disliked the seeming lack of plot. Though, to be fair, Franklin warns her readers in the introduction that it was all about her and for her that she wrote the book. Plot be damned, apparently. (No wonder her family thought it was autobiographical. She said as much!)

When I was in my early twenties, a movie was made of "My Brilliant Career" starring Sam Neill and Judy Davis (1979). It won six Australian Academy Awards and caused quite a buzz for the book. My mother and I saw the movie together and she told me she thought I was like Sybylla. Apparently I didn't press her as to what she meant at the time, but the comment has stayed with me since then. I thought that she compared me to Sybylla because the actress playing Sybylla (Davis) and I both have frizzy hair. But now that I've read the book I think she meant something different.  Of her four children, I was always the child who felt out-of-step with the family. In fact at one point as a young child I told my mother I didn't think I was as special as my siblings. My mother listened to my explanations but didn't hear or understand my pain. How do I know this? Because she immediately turned around and sang me the "Nobody Loves Me, Everybody Hates Me, Guess I'll Go Eat Worms" song. Obviously, my mother didn't understand me, nor did Sybylla's mother understand her. I was also a girl who had boys who were friends (not boyfriends) so did Sybylla. My mother could never understand this part of my personality. Lastly, I often compared my looks to my older sister and found myself wanting. I suspect that was what my mother saw a lot of Sybylla in me. Never fear. My mother and I have fully mended our relationship and are great friends now.

I thought I would rewatch the movie after I finished the book, but unfortunately I can't do it without paying money I am not willing to spend. The public library doesn't have it, neither does Netflix. Oh well. I shall have to deal with my memory on that one.

Miles Franklin is remembered as only a mediocre author, having published nearly ten novels, but she did do one really remarkable thing before she died. She established an annual award for the best novel about Australian life, the Miles Franklin Award. Oddly, one of the books on the Miles Franklin 2017 Short List is titled My Brilliant Careers, by Ryan O'Neill. I love it when life offer up coincidences like this.

How do I rate this book? I'd give it 3.5 stars out of 5. The best parts, about life in Australia during the late 1800s, is worth the read, if for no other reason than that.