The 57 Bus: A True Story of Two Teenagers and the Crime that Changed Their Lives by Dashka Slater

Argh! There are so many reviews I've wanted write for books read in 2017. I'm out of time. It is time to call UNCLE and admit they will not get written unless I give them less-than-full reviews. Here is the second of three. 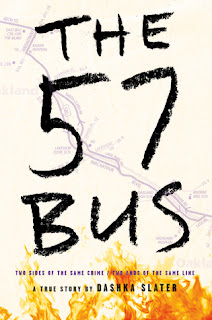 The 57 Bus: A True Story of Two Teenagers and the Crime that Changed Their Lives by Dashka Slater
Sasha is a white genderqueer teenager who likes to wear skirts and refer to self as "their, while Richard is a black teen who likes to goof around with his pals and has seen more than his fair share of deaths due to gun violence. They both were teens living in Oakland, California but lived very different lives. Then one day, for a mere 8 minutes the two came into the same sphere, on the 57 bus. While Sasha slept, Richard, egged on by his peers, lit Sasha's filmy sweater on fire with a lighter. Sasha sustained severe burns to his legs and had to go through months of agonizing treatments. Richard was arrested and charged with a hate crime and was remanded to be tried as an adult. Richard, who had been in juvenile detention previously, was deeply sorry for what he did. He even wrote several letters to Sasha expressing this. Several people advocated on behalf of Richard, asking the courts to try Richard as a juvenile. The case gained international attention. One thoughtless act changed the lives of two teens forever.
Dashka Slater initially wrote an article for the NY Times about the crime on the 57 bus. She extended her research and wrote this compelling account of a crime and its victims in book form. She writes in a journalistic style which I found easy to read. Though, as a librarian, I was bothered by the lack of a works cited page/no source notes. After reading as a judge for the Cybils in the Nonfiction category, I was used to scrutinizing books for correct attributions and references that are useful to student researchers. Though she did cite some of her sources within the text of her writing, many specifics were omitted. I expected see notes about this in the professional publication reviews of the book, but found none. I must be the only person bugged by this. Once I figured this out, I relaxed into the book and found it interesting and compelling.
One more thing. Sasha refers to self and wants to be called by the pronoun "their". Slater used the pronoun "their" when referring to Sasha. I'll tell you the truth, it got me completely confused. I kept thinking the author was talking about plural people. No matter how many times I coached myself, I was confused the whole time I was reading.  This really isn't the correct time to address this but I will just make a comment anyway.--- I empathize with the Sashas of the world who don't feel like they fit within our language. We need gender neutral singular pronouns in English that don't confuse speakers and readers. The use of "their", which is a plural but neutral pronoun, when referring to a single person is confusing and breaks with grammar rules. It can be changed, as evidenced by the change from Mrs./Miss to Ms. Come on language creators. Let's get this done. Enough said.

Posted by Anne@HeadFullofBooks at 5:18 PM