My Cybils reading has taken a bit of a backseat to the rest of my life lately, so I thought I would pause, take a breath, and let you know about three books I am really excited about. Three books about girls by girls. I am inspired and I hope teen readers out there will be, too. 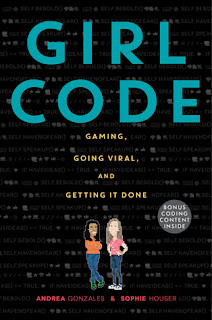 Girl Code: Gaming, Going Viral, and Getting It Done by Andrea Gonzales and Sophie Houser
Andrea and Sophie meet while they are attending a summer camp for girls on how to create computer code. The girls decide to work on their final project together---to create a web-based game. As the girls talk about their interests and hopes for their projects they realized they had similar ideals. They wanted to create a game that would make a difference for girls around the world. They decided, after gaining permission from their program director, to create a game called Tampon Run. As offensive as that sounds, they decided that girls around the world were often not allowed to do things, like go to school, because of taboos around menstruation. The game is not only fun to play, it is educational, as well. Even after graduation from their program the girls continued to work on the game. After its launch the game went viral and the girls were thrown into the spotlight even though they were both high school students who still needed to fulfill their class requirements. Both girls are now in college and wrote the book in alternating chapters about the challenges of being a girl in a male-dominated field.
I loved this book. It was so real. Girls wanting to make a difference and being willing to break into a field, computer coding, dominated by males. The end of the book even has some basic coding suggestions for girls to use to get started coding themselves. As I read it I couldn't help but think about the AP Computer Programming class at my old school. The class was taught by a male teacher and was dominated by male students. I think the teacher should consider using this book to inspire his students, mainly the girls, to continue in the field.
(Harper Collins eBook, 2017, checked out remotely from Overdrive) 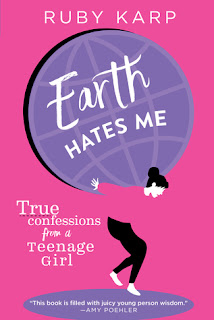 Earth Hates Me: True Confessions From a Teenage Girl by Ruby Karp
Ruby Karp is a sixteen-year-old is a comedian, performing at the UCB Theater in New York, an author, writing for Hello Giggles, and a high school student. Earth Hates Me is her first book. It is a combination of memoir and self-help book for teen girls. Ruby has a great sense of humor and this book reflects it.


Ruby advises her peers on the importance of feminism ("not just the Spice Girls version"), how to deal with jealousy and friend break-ups, family life, and much more. The book takes an in-depth look at the effect of social media on modern teens and the growing pressures of choosing the right college and career. Amy Poehler says, "This book is filled with juicy young person wisdom."  With Ruby's powerful underlying message "we are more than just a bunch of dumb teenagers obsessed with our phones," Earth Hates Me is the definitive guide to being a teen in the modern age (GoodReads).

Even though I am not a teenager, I enjoyed this book immensely. Karp speaks authentically to teenagers and her humor helps the advice she offers to not come across with a heavy-hand or a preachy-voice. I hope that all high school librarians reading this post add this book to their next book order!
(Running Press eBook, 2017, checked out from Overdrive) 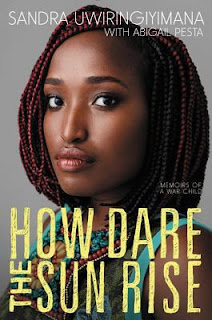 How Dare the Sun Rise: Memoirs of a War Child by Sandra Uwiringiyimana
When Sandra was ten-years-old she had a gun held to her head when the refugee camp where she and her family lived was invaded by local terrorists. These men had already killed her younger sister and wounded her mother. Somehow she escaped and was reunited with remnants of her family. Eventually Sandra and her family were granted visas to move to the Untied States as war refugees. Once here she met with new types of problems--- poverty, racism, language, and lack of community. The death of her sister haunted Sandra, also, and she wanted to do something to help refugees around the world and especially in her beloved home country of The Democratic Republic of Congo. With the help from her college and her church Sandra found her voice and became a potent advocate for refugees, even making presentations for the U.N. and the PressCorps where she met Michelle Obama.
This book is quite different than the other two I highlighted above. It is very inspiring, but also tremendously depressing to read about all the hate in the world and to learn about how it affects children. But I do encourage folks to read it, if for no other reason that to find how one person can make a difference if that person is willing to speak out!
(Katherine Tegen Books eBook, 2017, checked out from Overdrive)

I am not sure if any of these titles will pass out of Round 1 judging for the Cybils Award but I do encourage you to read all of them. It warms my heart to read three wonderful and empowering books written about girls, by girls.