Weather: It is sunny right now but it was raining earlier. Welcome to weather in the Northwest.

Babysitting Ian: I am babysitting Ian two or three days a week now and I am still in shock at how much work it is to care for an infant. He is such a doll but he only takes short naps so I don't get much down time during the days. I have got to plan outings to break up each day otherwise I am afraid I will go stir crazy. This past week I brought him with me to Bible Study and he was really good, smiling at everyone and sleeping during the lesson portion. He even napped in the car all the way back home. What a trooper!

250 steps: I dusted off my first generation FitBit around Christmas so I could join in the fun with my husband and daughter who got a FitBit each for Christmas. Their generation of FitBit nudges them once an hour to make sure they get and move for 250 steps per hour, minimum. Mine doesn't give me a nudge but the APP does record them so I can check to see if I have accomplished that minimum. I'll tell you what. This is a great idea. 10,000 steps a day is tough plus a huge concept that often seems unattainable. But getting my butt out of the chair once an hour to do a little walking around the house, or out in the yard, is very doable. It is a great place to start. I have even been known to dance while the coffee is warming in the microwave or march in place as I brush my teeth. Do it!. It's only 250 steps per hour. I challenge you.

Government Shutdown: An unnecessary event manufactured by Trump. I am adding this one to my list of deplorable actions by this guy. The list is very long.

A first: I have written a book review for every book I've read so far in 2018. This is a first and one I don't think I will be able to maintain. But for this moment in time I am feeling proud of myself for staying on top of my reviews. Admittedly, I have read less books than usual. Click the hyperlinks to read them: 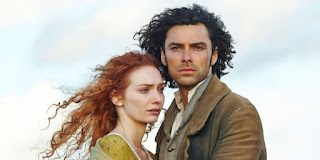 Watching: " Poldark." Back in the 1970s my mother and I were addicted to the Masterpiece Theater show when Poldark first aired. It is based on the books by Winston Graham, part of a six book series. I read at least four of the books back in the 70s when I was watching the original series. Now Masterpiece brings back the series with a new cast and fresh story line. Just like Outlander, the series is already three years in before Don and I have started watching it.  But this way we can watch a show a day until we catch up.