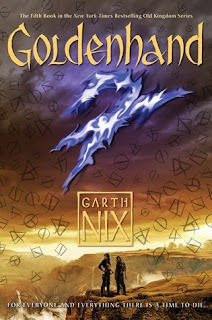 Back in 1995 Australian author Garth Nix introduced us to the Old Kingdom and to the Abhorsens who protected the kingdom from the greater and lesser dead. They do this by ushering the dead to the 9th gate of death so they could cross over and not bother people anymore. Sabriel is forced to take over as the Abhorsen because her father dies leaving her as the last hope to save the kingdom.

In 2001 Nix published Lirael, the next installment in the series (called The Old Kingdom Chronicles in other parts of the world, but The Abhorsen Trilogy in the USA.) And in 2003 the final book of the trilogy, Abhorsen where big bad things are brewing and a huge fight occurs to protect the kingdom from the worst dead guy of them all. With its conclusion I was satisfied that the series was done and that it had wrapped up well.

Then in 2014 a prequel to the Old Kingdom Chronicles, Clariel, was published. It is set six hundred years before Sabriel's time. In this book we not only are introduced to the kingdom but to its magic---charter magic and free magic which are often at odds with each other. Clariel comes in contact with free magic which corrupts her ability to tap into the charter. Left on her own she falls under the spell of free magic. We figure out at the end of the book that she is indeed a character in the original trilogy. Once again I felt satisfied that this book was it, but it did fill in some holes that needed to be patched.

I was surprised, therefore, to find that Nix had one more Old Kingdom story in him, Goldenhand, published in 2016. Both of my daughters and I are by this time avowed fans of The Abhorsen Trilogy having read them several years ago all in one fell swoop. We also were delighted with Clariel and read it soon after its publication date. When Goldenhand came out I promptly purchased a copy of the audiobook from Audible.com. I was sure I'd get to it before year's end. Or so I thought. Over a year later I was finally determined that I had to listen to, wanting to escape into a fantasy novel after my months of reading almost exclusively nonfiction.

Goldenhand picks up several months after the exciting events in Abhorsen. Lirael is now the Abhorsen in-waiting, working under Sabriel. She is in charge for  a few weeks while Sabriel and her husband, Touchstone, are on a vacation. Things in the kingdom are quiet so it should be easy to keep things in order. Suddenly a messenger arrives at the Old Kingdom Wall wanting passage in. She has an urgent message for Lirael. When she is not allowed in she jumps aboard a flimsy raft to escape her pursuers. As others come to her rescue they too are now in the cross hairs of her enemies. At the same time that this is happening, Lirael finds herself called to rescue Nick from a free-magic being. Suddenly what looks like a calm period of time is turning into a turbulent one. Is Lirael up to the task? As with earlier books in the series, the action is so tense and the characters in such danger one has to wonder if the good guys will really win this time or not.

As I started listening to Goldenhand I was thrust back into the Old Kingdom and was reminded how much I like this world. Nix has created quite a place for his characters to inhabit. I was back among friends. My only problem, a small one, was I had forgotten a few of the details from Abhorsen since I'd read it several years ago and the plot of this book picked up where that book left off. I should have reread it in preparation for Goldenhand. But I got up to speed fairly quickly and found myself once again rooting for Lirael, Sabriel, Touchstone, Sammath, and even Nick to prevail over the evil trying to undo their kingdom.

There are so many wonderful fantasy series out in the literary world it doesn't surprise me if you aren't aware of this one. But I really do think it is worth your time to read it. Now I am fairly sure that the whole series has finished it is safe to start it. Things tidied up nicely at the conclusion of Goldenhand. As a teen librarian I had a hard time talking my students into starting this series but if they did start it, they were hooked. Hooked in the best way possible---absorbed into another place and time, where magic is real, and friends are friends for life. 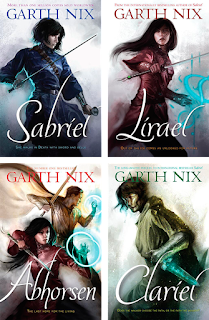 Posted by Anne@HeadFullofBooks at 3:37 PM