China:  Yes. We just got back from China where we had the trip of our lives. This Tuesday edition of Sunday Salon is dedicated to our China trip.

Invited: Our friends Ken and Carol invited us to go on the trip, as Carol could take a week off work in November. I'd been wanting to take a big trip, my first of retirement, so we jumped at the chance. We've been friends for over forty years and traveled easily together.

Tourists: We paid for guides to take us around Beijing and Xi'an, the two cities we visited in China. They were worth every penny we paid for them. We went to most of the famous tourist sites: The Summer Palace, Tienanmen Square, The Forbidden City, The Great Wall, The Terracotta Warriors, The Temple of Heaven. We saw the tomb of the last emperor of the Ming Dynasty, the Lama Temple, and walked on the city wall of Xi'an. We saw the pandas at the zoo.We rode in a rickshaw, and ate Peking Duck. We also squeezed in some not so touristy things like a visit to the 798 Art Zone, and witness to a spontaneous dance in the park in Xi'an, and a ride on the bullet train. What a trip! 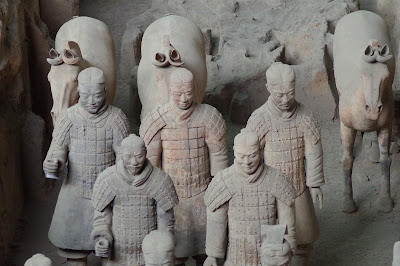 We weren't expecting: There were some things about China that we expected: fabulous historic sites, The Great Wall, pollution. But there were other things we didn't expect: the vast number of bicycles, squater toilets (my least favorite part of the trip), and the darling children. DRIVING in traffic (I'm still in recovery from this harrowing experience.)
Quiet moments: There are at least 22 million people living in Beijing and another 9 million in Xi'an. It is hard to get away from the crowds but we managed to have a few moments while in China. When we walked down the Sacred Way we were about the only people there. While visiting the Forbidden City, Kevin took us down a side alley to a small courtyard which at one time was the home of the Emperor's favorite concubine, few other people were there. And who doesn't love a serene moment with swans (at the zoo.)
Look what we stumbled upon: We came upon a film project in the Art Zone and a spontaneous dance in the park across from the hotel in Xi'an.
Books read during the long flights and train trips:
International Dateline: I've heard about it but finally experienced it first hand. Heading west we lost a day. We left Seattle on Friday afternoon and arrived in China on Saturday night. That was strange but heading east was weirder. We left China on Sunday around noon and arrived in Seattle at 6:30 AM Sunday...the longest day of our lives.

Trip of a lifetime: one more image from China, a place of mysteries and delights.
Home: We are home. There is no place like home. Thank you to our neighbor Susie for taking care of the cats. We had to visit Ian and his parents right away. Ian is growing so fast. At two months he is still the great delight of our lives.
Unless otherwise noted, photo credits belong to Don Bennett.

Posted by Anne@HeadFullofBooks at 11:14 AM